Crohn’s disease (CD) and ulcerative colitis (UC) are chronic inflammatory bowel diseases (IBDs) of unknown etiology that are associated with an aberrant mucosal immune response. Neoangiogenesis and vascular injury are observed in IBD along with increased lymphangiogenesis. While the pathogenic role of angiogenesis in IBD is well characterized, it is not clear how or if increased lymphangiogenesis promotes disease. Here, we determined that enhancing lymphangiogenesis and lymphatic function reduces experimental IBD. Specifically, we demonstrated that adenoviral induction of prolymphangiogenic factor VEGF-C provides marked protection against the development of acute and chronic colitis in 2 different animal models. VEGF-C–dependent protection was observed in combination with increased inflammatory cell mobilization and bacterial antigen clearance from the inflamed colon to the draining lymph nodes. Moreover, we found that the VEGF-C/VEGFR3 pathway regulates macrophage (MΦ) plasticity and activation both in cultured MΦs and in vivo, imparting a hybrid M1-M2 phenotype. The protective function of VEGF-C was meditated by the so-called resolving MΦs during chronic experimental colitis in a STAT6-dependent manner. Together, these findings shed light on the contribution of lymphatics to the pathogenesis of gut inflammation and suggest that correction of defective lymphatic function with VEGF-C has potential as a therapeutic strategy for IBD. 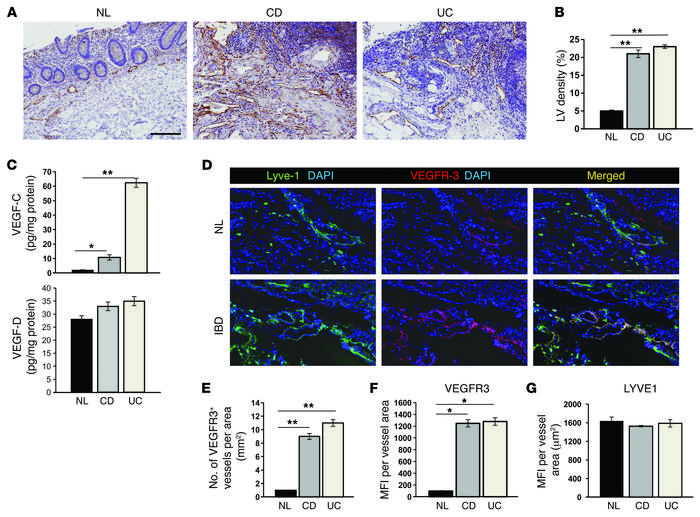 ( and ) Immunohistochemical staining with an Ab recognizing podoplanin was performed on control (NL) and active CD– and UC–involved colons (). Quantitative analysis of LV density in the same sections is shown in . Data are expressed as the mean percentage of LV per area ± SEM. Scale bar: 100 μm. () Control ( = 15) and CD ( = 16) and UC ( = 16) patients with active inflammation were investigated for VEGF-C and VEGF-D content in mucosal extracts. VEGF-C and VEGF-D were measured by ELISA. () Frozen sections from the colons of control (NL, = 15) or CD (IBD, = 16) patients with active inflammation stained with both anti-LYVE1 and anti-VEGFR3 Abs. Original magnification, ×40. () VEGFR3+ LVs were quantified by stereological point counting of 10 regions per section, and the numbers were normalized per total section area expressed in mm2. Results are presented as the mean vessel density per group ± SEM. ( and ) MFI per vessel was analyzed on VEGFR3+ () and LYVE1+ () LVs (10–15 vessels per section). MFI is expressed as relative units normalized per vascular area expressed in μm2. * < 0.01; ** < 0.001 (, , , and ).