Chromosomal translocation that results in fusion of the genes encoding RNA-binding protein EWS and transcription factor FLI1 (EWS-FLI1) is pathognomonic for Ewing sarcoma. EWS-FLI1 alters gene expression through mechanisms that are not completely understood. We performed RNA sequencing (RNAseq) analysis on primary pediatric human mesenchymal progenitor cells (pMPCs) expressing EWS-FLI1 in order to identify gene targets of this oncoprotein. We determined that long noncoding RNA-277 (Ewing sarcoma–associated transcript 1 []) is upregulated by EWS-FLI1 in pMPCs. Inhibition of expression diminished the ability of Ewing sarcoma cell lines to proliferate and form colonies in soft agar, whereas inhibition had no effect on other cell types tested. Expression of EWS-FLI1 and repressed gene expression, and a substantial fraction of targets that were repressed by EWS-FLI1 were also repressed by . Analysis of RNAseq data from primary human Ewing sarcoma further supported a role for in mediating gene repression. We identified heterogeneous nuclear ribonucleoprotein (HNRNPK) as an RNA-binding protein that interacts with and found a marked overlap in HNRNPK-repressed genes and those repressed by EWS-FLI1 and , suggesting that HNRNPK participates in -mediated gene repression. Together, our data reveal that is a downstream target of EWS-FLI1 that facilitates the development of Ewing sarcoma via the repression of target genes. 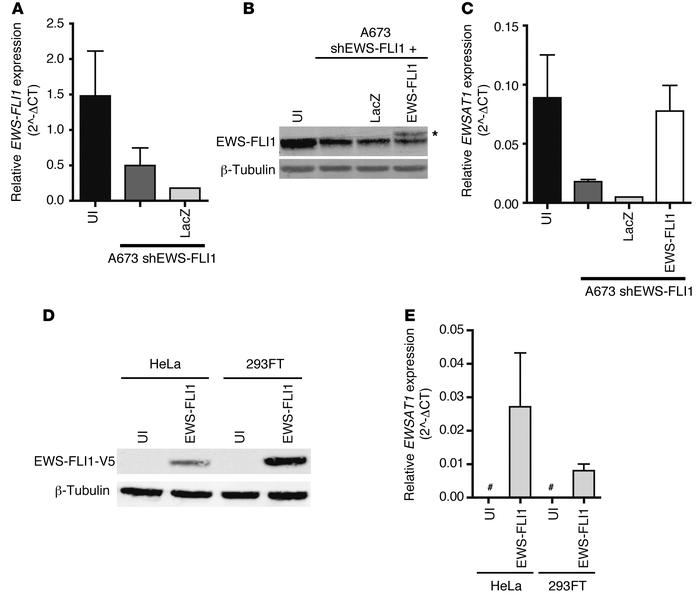