Approximately 85% of lung cancers are non–small-cell lung cancers (NSCLCs), which are often diagnosed at an advanced stage and associated with poor prognosis. Currently, there are very few therapies available for NSCLCs due to the recalcitrant nature of this cancer. Mutations that activate the small GTPase KRAS are found in 20% to 30% of NSCLCs. Here, we report that inhibition of superoxide dismutase 1 (SOD1) by the small molecule ATN-224 induced cell death in various NSCLC cells, including those harboring mutations. ATN-224–dependent SOD1 inhibition increased superoxide, which diminished enzyme activity of the antioxidant glutathione peroxidase, leading to an increase in intracellular hydrogen peroxide (H2O2) levels. We found that ATN-224–induced cell death was mediated through H2O2-dependent activation of P38 MAPK and that P38 activation led to a decrease in the antiapoptotic factor MCL1, which is often upregulated in NSCLC. Treatment with both ATN-224 and ABT-263, an inhibitor of the apoptosis regulators BCL2/BCLXL, augmented cell death. Furthermore, we demonstrate that ATN-224 reduced tumor burden in a mouse model of NSCLC. Our results indicate that antioxidant inhibition by ATN-224 has potential clinical applications as a single agent, or in combination with other drugs, for the treatment of patients with various forms of NSCLC, including -driven cancers. 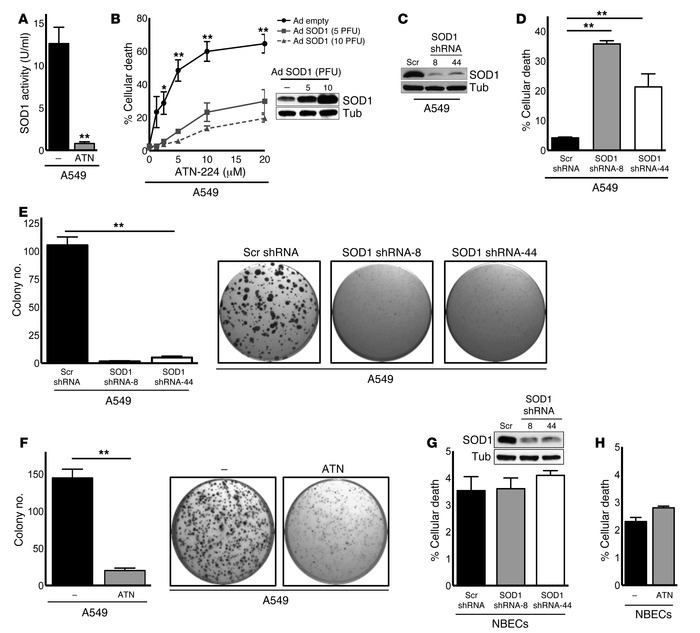