Angioinvasion is a hallmark of mucormycosis. Previously, we identified endothelial cell glucose-regulated protein 78 (GRP78) as a receptor for Mucorales that mediates host cell invasion. Here we determined that spore coat protein homologs (CotH) of Mucorales act as fungal ligands for GRP78. CotH proteins were widely present in Mucorales and absent from noninvasive pathogens. Heterologous expression of and in conferred the ability to invade host cells via binding to GRP78. Homology modeling and computational docking studies indicated structurally compatible interactions between GRP78 and both CotH3 and CotH2. A mutant of , the most common cause of mucormycosis, with reduced CotH expression was impaired for invading and damaging endothelial cells and CHO cells overexpressing GRP78. This strain also exhibited reduced virulence in a diabetic ketoacidotic (DKA) mouse model of mucormycosis. Treatment with anti-CotH Abs abolished the ability of to invade host cells and protected DKA mice from mucormycosis. The presence of CotH in Mucorales explained the specific susceptibility of DKA patients, who have increased GRP78 levels, to mucormycosis. Together, these data indicate that CotH3 and CotH2 function as invasins that interact with host cell GRP78 to mediate pathogenic host-cell interactions and identify CotH as a promising therapeutic target for mucormycosis. 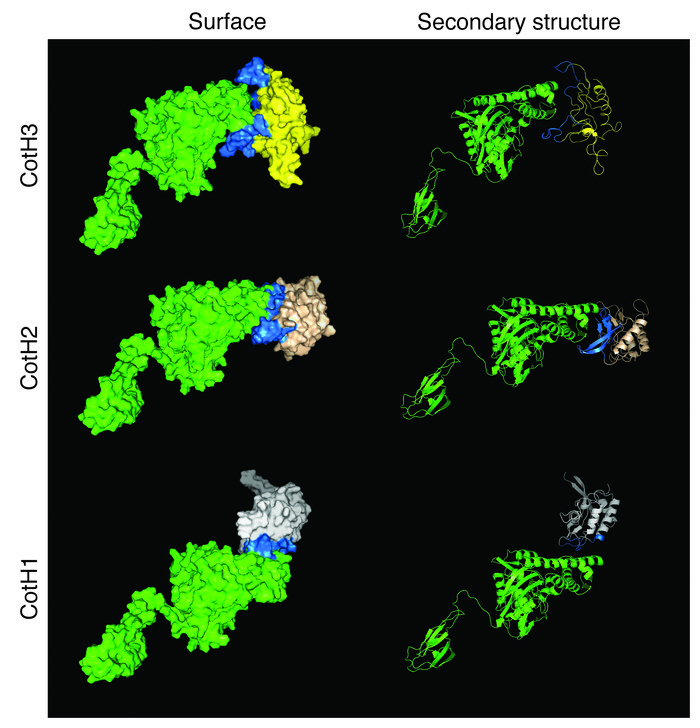 Models of CotH proteins were generated by homology threading from templates with known structures determined by crystallography. Molecular docking was then evaluated using CotH protein as the ligand and GRP78 as the target. The visualized water-accessible surface areas and secondary structures were energy-minimized for CotH3 (yellow), CotH2 (beige), or CotH1 (white) binding to GRP78 (green). Comparative contact areas of respective CotH proteins are shown in blue. Note the large, bimodal binding cleft in CotH3 that was also partially present in CotH2, consistent with biological findings. In contrast, CotH1 exhibited a limited contact area on a distinct aspect of the GRP78 target protein. Of interest are the comparative structural domains that may confer GRP78 interactions by differing CotH proteins. For example, each of the CotH proteins has multiple α-helical domains that appear to serve as a structural scaffold. However, the proteins differ considerably in the extent of their β-sheet conformation. For example, CotH3 exhibits an extended docking-predicted GRP78 contact facet, with little β-sheet stabilization. Conversely, CotH2 and, to a lesser extent, CotH1 contain explicit β-sheet structural domains. In the former case, this domain forms a component of the GRP78-docking facet. In the latter, the β-sheet domain does not appear to be involved in interactions with GRP78. Thus, despite similarities in their overall topology, more specific 3D aspects likely determine the capability for distinct CotH protein interactions with GRP78.