Herniated disc (HD), one of the major causes of low back pain, is often resolved spontaneously without surgical intervention. Resorption is associated with a marked increase in infiltrating macrophages, and the matrix metalloproteinases (MMP) MMP-3 and MMP-7 have been implicated in this phenomenon. We developed a murine organ culture model in which intact intervertebral discs were cocultured with peritoneal macrophages to investigate the role of MMPs in HD resorption. Using macrophages isolated from MMP-null mice, we report that macrophage-produced MMP-7 was required for proteoglycan degradation, loss of wet weight, and macrophage infiltration of cocultured discs. The inability of MMP-7–deficient macrophages to infiltrate discs could not be attributed to a defect in macrophage migration. MMP-7 was required for the release of the cytokine TNF-α from peritoneal macrophages. The generation of soluble TNF-α was essential for the induction of MMP-3 in disc cocultures, which in turn is required for the generation of a macrophage chemoattractant and subsequent macrophage infiltration. TNF-α release from macrophages was necessary but insufficient for disc resorption, which required macrophage infiltration. We conclude that there is extensive communication between macrophages and chondrocytes in HD resorption and that an essential component of this communication is the requirement for MMPs to release soluble bioactive factors. 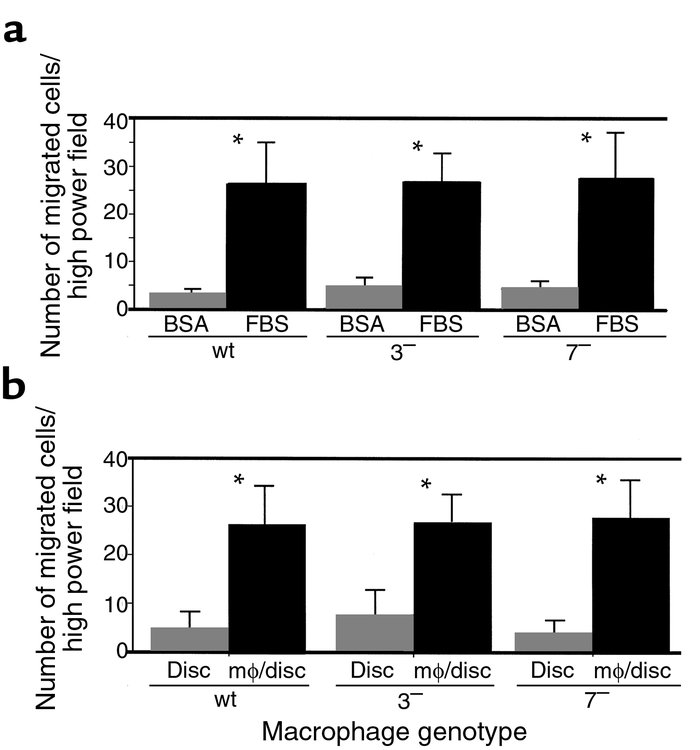 Quantitative analysis of macrophage migratory activity. Wild-type (wt), MMP-3–null (3–), and MMP-7–null (7–) macrophages were placed in the top well of a modified Boyden chamber, and the number of macrophages migrating through the filter was counted in 6 random ×400 high-power fields for each well. () BSA (200 μg/mL) in DMEM or FBS (10%) in DMEM was placed in the lower chamber. () Conditioned medium from intervertebral discs from wild-type mice (disc) or discs cocultured with wild-type macrophages (mφ/disc) was placed in the lower chamber. Data from 2 experiments performed in triplicate were analyzed with the Mann-Whitney test and presented as mean ± SD. *Statistically significant differences ( < 0.05) compared with control medium.