There are 3 major sweat-producing glands present in skin; eccrine, apocrine, and apoeccrine glands. Due to the high rate of secretion, eccrine sweating is a vital regulator of body temperature in response to thermal stress in humans; therefore, an inability to sweat (anhidrosis) results in heat intolerance that may cause impaired consciousness and death. Here, we have reported 5 members of a consanguineous family with generalized, isolated anhidrosis, but morphologically normal eccrine sweat glands. Whole-genome analysis identified the presence of a homozygous missense mutation in , which encodes the type 2 inositol 1,4,5-trisphosphate receptor (InsP3R2), that was present in all affected family members. We determined that the mutation is localized within the pore forming region of InsP3R2 and abrogates Ca2+ release from the endoplasmic reticulum, which suggests that intracellular Ca2+ release by InsP3R2 in clear cells of the sweat glands is important for eccrine sweat production. mice exhibited a marked reduction in sweat secretion, and evaluation of sweat glands from animals revealed a decrease in Ca2+ response compared with controls. Together, our data indicate that loss of InsP3R2-mediated Ca2+ release causes isolated anhidrosis in humans and suggest that specific InsP3R inhibitors have the potential to reduce sweat production in hyperhidrosis. 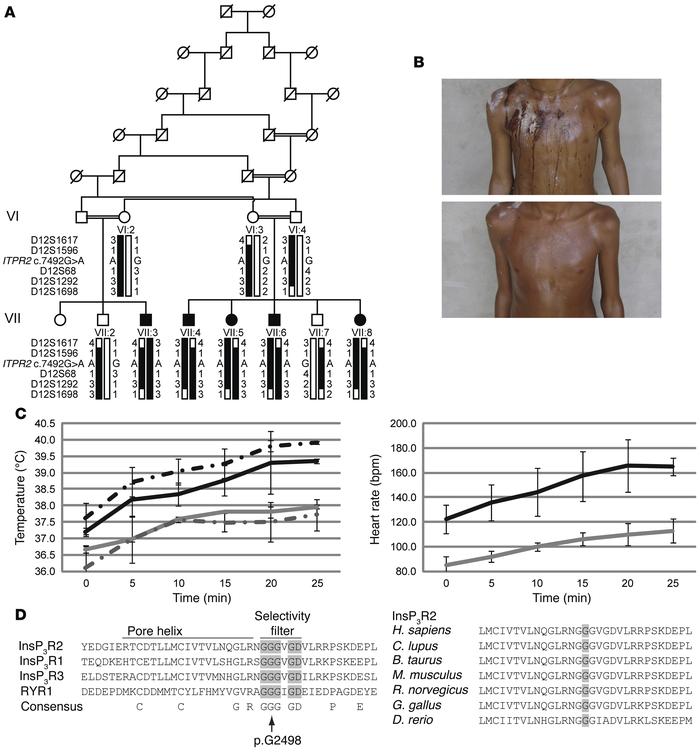