Insulin-independent glucose disposal (referred to as glucose effectiveness [GE]) is crucial for glucose homeostasis and, until recently, was thought to be invariable. However, GE is reduced in type 2 diabetes and markedly decreased in leptin-deficient mice. Strategies aimed at increasing GE should therefore be capable of improving glucose tolerance in these animals. The gut-derived hormone FGF19 has previously been shown to exert potent antidiabetic effects in mice. In mice, we found that systemic FGF19 administration improved glucose tolerance through its action in the brain and that a single, low-dose i.c.v. injection of FGF19 dramatically improved glucose intolerance within 2 hours. Minimal model analysis of glucose and insulin data obtained during a frequently sampled i.v. glucose tolerance test showed that the antidiabetic effect of i.c.v. FGF19 was solely due to increased GE and not to changes of either insulin secretion or insulin sensitivity. The mechanism underlying this effect appears to involve increased metabolism of glucose to lactate. Together, these findings implicate the brain in the antidiabetic action of systemic FGF19 and establish the brain’s capacity to rapidly, potently, and selectively increase insulin-independent glucose disposal.

Effect on glucose tolerance of a single injection FGF19 given either centrally or systemically to mice. 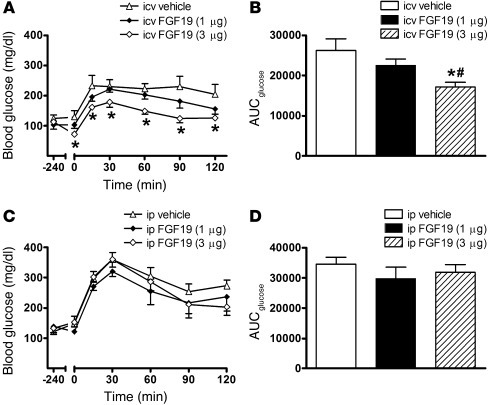