Genetic variation at the chromosome 9p21 risk locus promotes cardiovascular disease; however, it is unclear how or which proteins encoded at this locus contribute to disease. We have previously demonstrated that loss of one candidate gene at this locus, cyclin-dependent kinase inhibitor 2B (Cdkn2b), in mice promotes vascular SMC apoptosis and aneurysm progression. Here, we investigated the role of Cdnk2b in atherogenesis and found that in a mouse model of atherosclerosis, deletion of Cdnk2b promoted advanced development of atherosclerotic plaques composed of large necrotic cores. Furthermore, human carriers of the 9p21 risk allele had reduced expression of CDKN2B in atherosclerotic plaques, which was associated with impaired expression of calreticulin, a ligand required for activation of engulfment receptors on phagocytic cells. As a result of decreased calreticulin, CDKN2B-deficient apoptotic bodies were resistant to efferocytosis and not efficiently cleared by neighboring macrophages. These uncleared SMCs elicited a series of proatherogenic juxtacrine responses associated with increased foam cell formation and inflammatory cytokine elaboration. The addition of exogenous calreticulin reversed defects associated with loss of Cdkn2b and normalized engulfment of Cdkn2b-deficient cells. Together, these data suggest that loss of CDKN2B promotes atherosclerosis by increasing the size and complexity of the lipid-laden necrotic core through impaired efferocytosis.

Loss of is associated with reduced expression of the key phagocyte receptor ligand calreticulin. 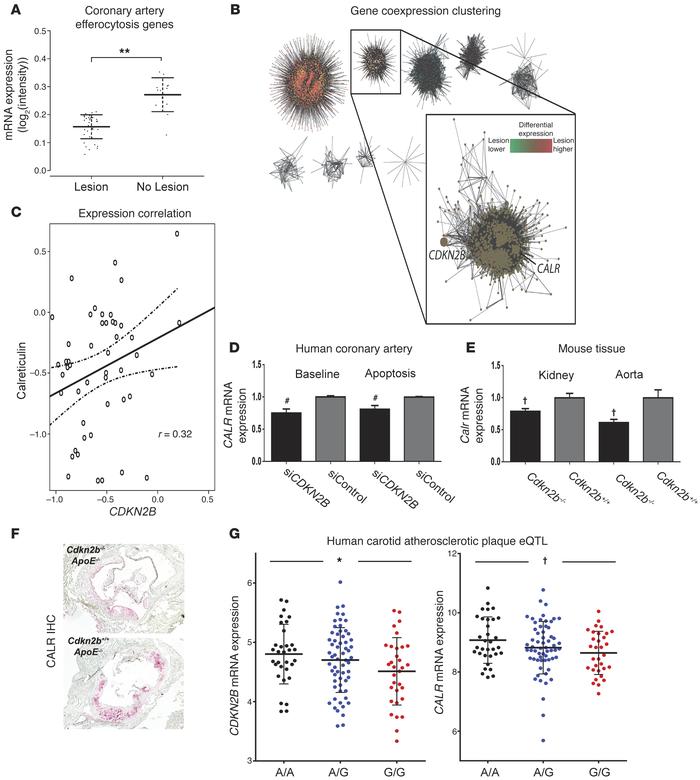 Weighted gene coexpression analysis of 51 HCA segments revealed that colocalizes with in () local coexpression topology with efferocytosis genes that are downregulated in coronary artery samples with atherosclerotic lesions compared with those without atherosclerotic lesions (** < 0.001), and () global module discovery in weighted gene coexpression analysis of 20,226 transcripts. Node color in network graph corresponds to module assignment. Inset depicts module containing and identified via hierarchical clustering of the topological overlap between all transcript pairs. Node color in inset corresponds to differential expression of module members in coronary artery samples with atherosclerotic lesions versus those without atherosclerotic lesions. () is directly correlated with expression in coronary artery sections. In all network diagrams, the edge width corresponds to the topological overlap between linked nodes. () A similar pattern was observed in vitro, as -deficient HCAMSCs expressed lower levels of than control-transfected HCASMCs (siControl), both at baseline and during apoptosis. # < 0.01. () mice also expressed less than mice in both the kidney and aorta. () Semiquantitative immunostaining confirmed the reduction of expression in atherosclerotic plaque from animals. Original magnification, ×4. IHC, immunohistochemistry. () eQTL analysis of 127 human carotid artery atherosclerotic plaque samples revealed that carriers of a representative 9p21 risk allele (“G” in red, relative to ancestral “A” allele in black) have simultaneous reductions in the expression of both (left panel, * < 0.05) and (right panel, † < 0.03).