Allan-Herndon-Dudley syndrome (AHDS), a severe form of psychomotor retardation with abnormal thyroid hormone (TH) parameters, is linked to mutations in the TH-specific monocarboxylate transporter MCT8. In mice, deletion of ( KO) faithfully replicates AHDS-associated endocrine abnormalities; however, unlike patients, these animals do not exhibit neurological impairments. While transport of the active form of TH (T3) across the blood-brain barrier is strongly diminished in KO animals, prohormone (T4) can still enter the brain, possibly due to the presence of T4-selective organic anion transporting polypeptide (OATP1C1). Here, we characterized mice deficient for both TH transporters, MCT8 and OATP1C1 (/ DKO). DKO mice exhibited alterations in peripheral TH homeostasis that were similar to those in KO mice; however, uptake of both T3 and T4 into the brains of DKO mice was strongly reduced. Evidence of TH deprivation in the CNS of DKO mice included highly decreased brain TH content as well as altered deiodinase activities and TH target gene expression. Consistent with delayed cerebellar development and reduced myelination, DKO mice displayed pronounced locomotor abnormalities. Intriguingly, differentiation of GABAergic interneurons in the cerebral cortex was highly compromised. Our findings underscore the importance of TH transporters for proper brain development and provide a basis to study the pathogenic mechanisms underlying AHDS. 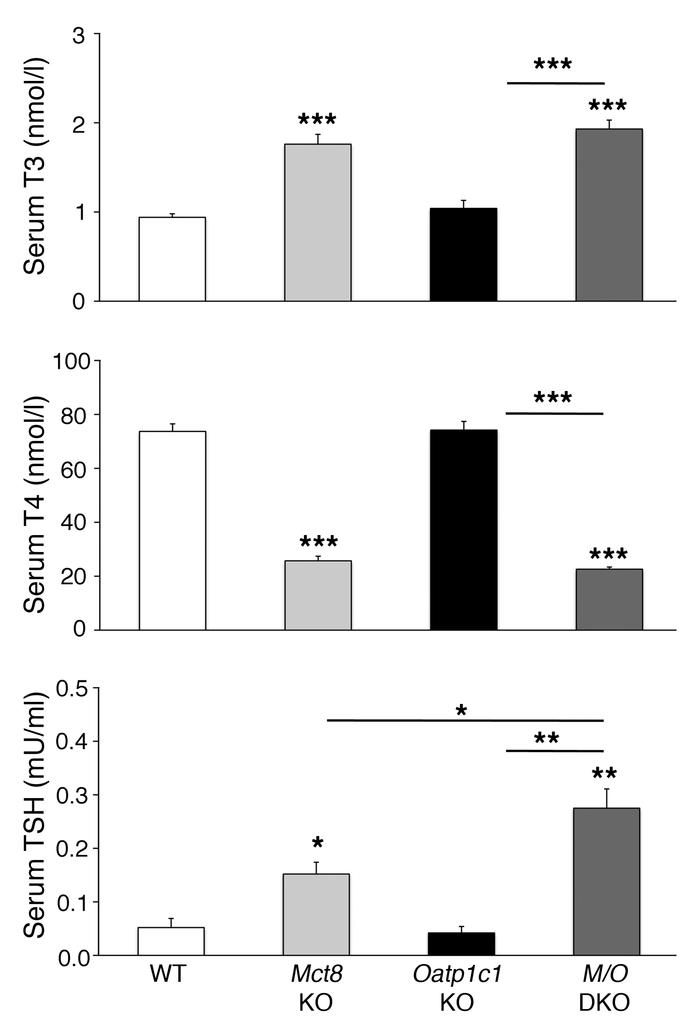 Serum samples of 8 animals per genotype were analyzed at P21 and revealed increased T3 and decreased T4 serum levels in DKO mice ( DKO) as well as in KO mice, whereas KO mice did not exhibit any alterations in serum TH parameters. Serum TSH concentrations were elevated in KO mice and even more so in DKO animals, which suggests that in the absence of both TH transporters, the HPT abnormalities characteristic of deficiency are even more pronounced. * < 0.05, ** < 0.01, *** < 0.001 vs. WT, or as otherwise indicated (brackets).