Central congenital hypothyroidism (CCH) is more prevalent in children born to women with hyperthyroidism during pregnancy, suggesting a role for thyroid hormone (TH) in the development of central thyroid regulation. Using the zebrafish embryo as a model for thyroid axis development, we have characterized the ontogeny of negative feedback regulation of thyrotrope function and examined the effect of excess TH on thyrotrope development. We found that thyroid-stimulating hormone β subunit () and type 2 deiodinase () are coexpressed in zebrafish thyrotropes by 48 hours after fertilization and that TH-driven negative feedback regulation of transcription appears in the thyroid axis by 96 hours after fertilization. Negative feedback regulation correlated with increased systemic TH levels from the developing thyroid follicles. We used a transgenic zebrafish that expresses GFP under the control of the promoter to follow thyrotrope fates in vivo. Time-lapse imaging revealed that early exposure to elevated TH leads to thyrotrope cell death. Thyrotrope numbers slowly recovered following the removal of excess TH. These data demonstrate that transient TH exposure profoundly impacts the thyrotrope population during a critical period of pituitary development and may have long-term implications for the functional reserve of thyroid-stimulating hormone (TSH) production and the TSH set point later in life. 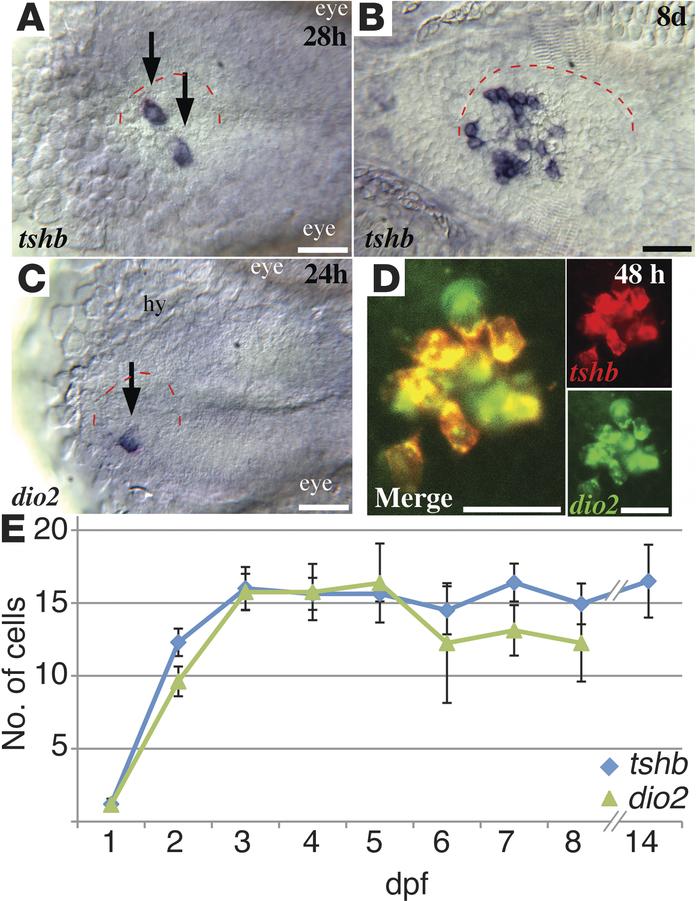 () was first expressed between 28 and 32 hpf in 1 to 2 cells of the pituitary placode as revealed by ISH. () Thyrotrope numbers increased to approximately 12 cells by 8 dpf. () is first expressed in 1 to 2 pituitary cells by 24 hpf, approximately 4 hours before expression begins. () Double-fluorescence ISH revealed that and were coexpressed in thyrotropes by 48 hpf. () Graph showing increases in thyrotrope cell numbers over the first 14 days of development, as determined by counting - (blue) and -expressing (green) cells. (–) Ventral views of the left anterior head between the eyes; dashed red lines outline the left half of the pituitary placode, which is positioned ventral to the hypothalamus (hy). Scale bars: 25 μm.