Harnessing the potential of epigenetic therapy to target solid tumors

Harnessing the potential of epigenetic therapy to target solid tumors

Epigenetic therapies may play a prominent role in the future management of solid tumors. This possibility is based on the clinical efficacy of existing drugs in treating defined hematopoietic neoplasms, paired with promising new data from preclinical and clinical studies that examined these agents in solid tumors. We suggest that current drugs may represent a targeted therapeutic approach for reprogramming solid tumor cells, a strategy that must be pursued in concert with the explosion in knowledge about the molecular underpinnings of normal and cancer epigenomes. We hypothesize that understanding targeted proteins in the context of their enzymatic and scaffolding functions and in terms of their interactions in complexes with proteins that are targets of new drugs under development defines the future of epigenetic therapies for cancer. 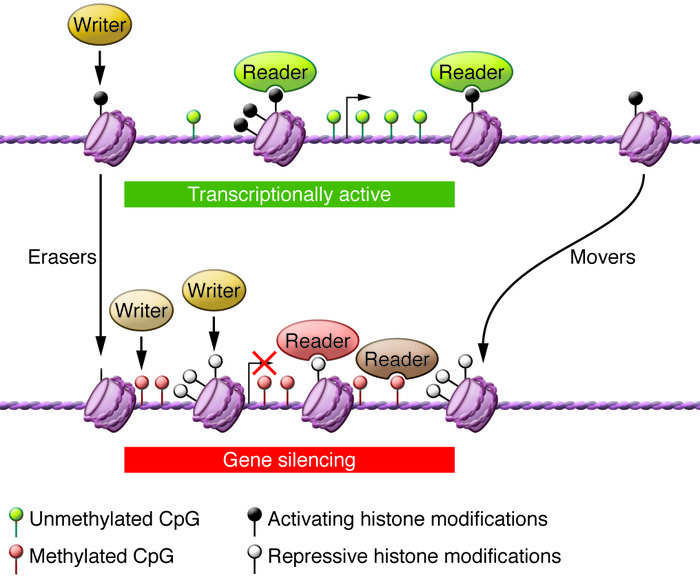 The epigenetic machinery consists of components that catalyze the covalent modifications of histone tails or the DNA (writers). These marks are interpreted by proteins (readers) that bind to the epigenetic marks, resulting in regulation of gene expression. Another class of proteins (erasers) reverses the epigenetic marks by catalyzing their removal. A class of protein complexes (movers) catalyzes the shifting of nucleosomes, resulting in a compact or relaxed chromatin. Here, the broad importance of these proteins in the context of gene silencing is shown. Writers acting separately on histones and DNA result in inactive histone modifications and CpG methylation. Erasers (such as LSD1) remove active histone modifications. Protein readers that bind to active histone (black lollipops) marks (e.g., bromodomain containing 4) are shown in green, those binding to inactive histone (white lollipops) marks (e.g., heterochromatin protein 1, chromobox homolog 7) are shown in pink, and those binding to methylated CpG (green lollipop denotes unmethylated CpG; red lollipop denotes methylated CpG) are shown in brown. The histone movers are shown to play a role in compacting chromatin. Once silenced, a gene will be maintained in the silenced state across cell divisions via recruitment of the writers in every cell cycle.