Apelin is a positive regulator of ACE2 in failing hearts

Apelin is a positive regulator of ACE2 in failing hearts

Angiotensin converting enzyme 2 (ACE2) is a negative regulator of the renin-angiotensin system (RAS), catalyzing the conversion of Angiotensin II to Angiotensin 1-7. Apelin is a second catalytic substrate for ACE2 and functions as an inotropic and cardioprotective peptide. While an antagonistic relationship between the RAS and apelin has been proposed, such functional interplay remains elusive. Here we found that ACE2 was downregulated in apelin-deficient mice. Pharmacological or genetic inhibition of angiotensin II type 1 receptor (AT1R) rescued the impaired contractility and hypertrophy of apelin mutant mice, which was accompanied by restored ACE2 levels. Importantly, treatment with angiotensin 1-7 rescued hypertrophy and heart dysfunctions of apelin-knockout mice. Moreover, apelin, via activation of its receptor, APJ, increased ACE2 promoter activity in vitro and upregulated ACE2 expression in failing hearts in vivo. Apelin treatment also increased cardiac contractility and ACE2 levels in AT1R-deficient mice. These data demonstrate that ACE2 couples the RAS to the apelin system, adding a conceptual framework for the apelin-ACE2–angiotensin 1-7 axis as a therapeutic target for cardiovascular diseases. 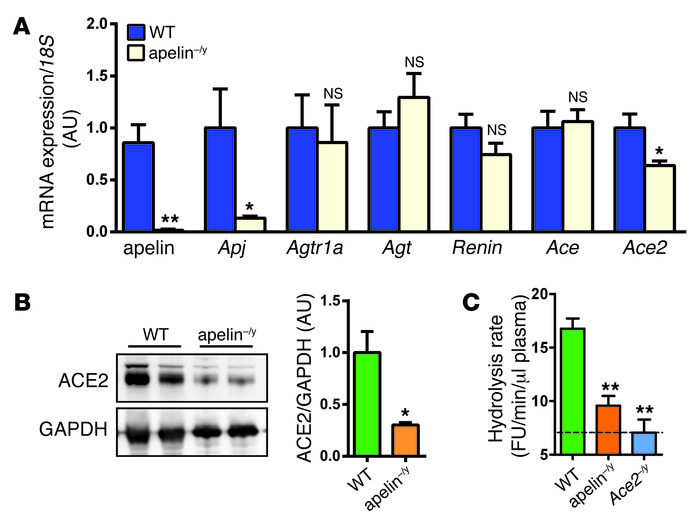 () Real-time PCR analysis for mRNA expression of apelin, APJ receptor, and the indicated renin-angiotensin component genes in the hearts of 12-month-old male apelin-knockout (apelin–/y) mice and wild-type littermate mice. Values were normalized to 18S RNA ( = 8 per group) and are shown as mean AU. () Western blot for ACE2 in the hearts of apelin–/y and wild-type mice. GAPDH is shown as a loading control, and representative blots and quantifications (right panels, = 6) are shown. () ACE2 activity in the plasma of apelin–/y mice. Hydrolysis rates of the fluorogenic ACE2 substrate Mca-APK-(Dnp) in the plasma of apelin–/y and wild-type mice were measured at baseline with ACE2-knockout () mice serving as background controls. All values represent means ± SEM. * < 0.05; ** < 0.01 versus wild type.