Lumbar disc degeneration is linked to a carbohydrate sulfotransferase 3 variant

Lumbar disc degeneration is linked to a carbohydrate sulfotransferase 3 variant

Lumbar disc degeneration (LDD) is associated with both genetic and environmental factors and affects many people worldwide. A hallmark of LDD is loss of proteoglycan and water content in the nucleus pulposus of intervertebral discs. While some genetic determinants have been reported, the etiology of LDD is largely unknown. Here we report the findings from linkage and association studies on a total of 32,642 subjects consisting of 4,043 LDD cases and 28,599 control subjects. We identified carbohydrate sulfotransferase 3 (), an enzyme that catalyzes proteoglycan sulfation, as a susceptibility gene for LDD. The strongest genome-wide linkage peak encompassed from a Southern Chinese family–based data set, while a genome-wide association was observed at rs4148941 in the gene in a meta-analysis using multiethnic population cohorts. rs4148941 lies within a potential microRNA-513a-5p (miR-513a-5p) binding site. Interaction between miR-513a-5p and mRNA transcribed from the susceptibility allele (A allele) of rs4148941 was enhanced in vitro compared with transcripts from other alleles. Additionally, expression of mRNA was significantly reduced in the intervertebral disc cells of human subjects carrying the A allele of rs4148941. Together, our data provide new insights into the etiology of LDD, implicating an interplay between genetic risk factors and miRNA.

Linkage and association analyses for LDD. 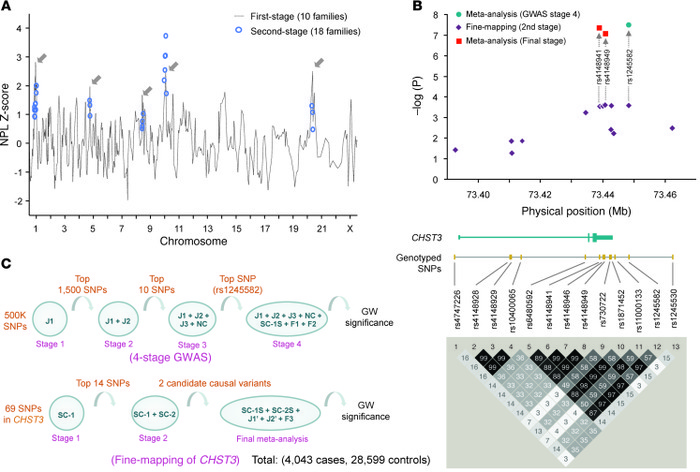 () NPL Z-score plot of the 2-stage genome-wide linkage analysis. Scores of the first-stage analysis using 10 Southern Chinese families are plotted against the position of the microsatellite markers across the different chromosomes (gray dotted line). Suggestive regions (gray arrows) were then analyzed in the second stage using additional markers and an additional 8 families; the total scores of these markers are denoted by blue circles. A score of 3 was used as the threshold for significance. () Workflow of the 4-stage GWAS and the 3-stage fine-mapping of in the identification of potential causal variants reaching genome-wide (GW) significance. The number of SNPs selected for analysis at each stage, the cohort used, and the total number of cases and controls in the study are indicated. () Position of the SNPs in relation to . Purple diamonds, –log10(P) values; red squares, values of the 2 significant SNPs within the 3′UTR in a meta-analysis using 3 population cohorts; blue circle, original SNP from the GWAS and replication studies. The physical map of the gene structure of is shown in relation to the physical position in chromosome 10. The LD map () was generated from the 13 SNPs genotyped from the SC-1 + SC-2 cohort ( = 2,999).