Cardiac resynchronization sensitizes the sarcomere to calcium by reactivating GSK-3β

Cardiac resynchronization sensitizes the sarcomere to calcium by reactivating GSK-3β

Cardiac resynchronization therapy (CRT), the application of biventricular stimulation to correct discoordinate contraction, is the only heart failure treatment that enhances acute and chronic systolic function, increases cardiac work, and reduces mortality. Resting myocyte function also increases after CRT despite only modest improvement in calcium transients, suggesting that CRT may enhance myofilament calcium responsiveness. To test this hypothesis, we examined adult dogs subjected to tachypacing-induced heart failure for 6 weeks, concurrent with ventricular dyssynchrony (HFdys) or CRT. Myofilament force-calcium relationships were measured in skinned trabeculae and/or myocytes. Compared with control, maximal calcium-activated force and calcium sensitivity declined globally in HFdys; however, CRT restored both. Phosphatase PP1 induced calcium desensitization in control and CRT-treated cells, while HFdys cells were unaffected, implying that CRT enhances myofilament phosphorylation. Proteomics revealed phosphorylation sites on Z-disk and M-band proteins, which were predicted to be targets of glycogen synthase kinase-3β (GSK-3β). We found that GSK-3β was deactivated in HFdys and reactivated by CRT. Mass spectrometry of myofilament proteins from HFdys animals incubated with GSK-3β confirmed GSK-3β–dependent phosphorylation at many of the same sites observed with CRT. GSK-3β restored calcium sensitivity in HFdys, but did not affect control or CRT cells. These data indicate that CRT improves calcium responsiveness of myofilaments following HFdys through GSK-3β reactivation, identifying a therapeutic approach to enhancing contractile function.

The apparent decrease in Fmax is due to myocyte hypertrophy. 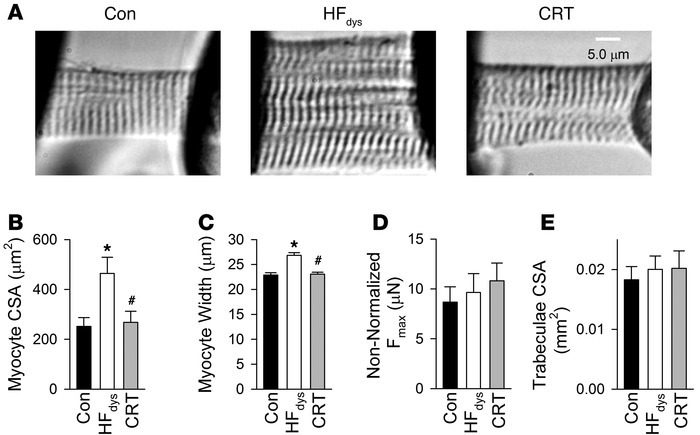 () Skinned myocytes from controls, HFdys, and CRT. () CSA (calculated by measuring both width and depth and assuming an elliptical shape) was significantly increased in HFdys, but restored to normal levels in CRT. () The unbiased approach also showed that HFdys myocytes were hypertrophied, and this was reversed by CRT ( = 150 myocytes from 3 dogs per group). () Fmax is typically normalized to CSA, but if it is not, the myocytes generate the same amount of force between the groups, indicating that the force producing capacity of the myocytes is not altered; they are just bigger. () There was no difference in trabeculae muscle size, despite the fact that a decrease in Fmax was also observed. This suggests that there are fewer myocytes in HFdys in a constant area of myocardium. * < 0.05 vs. control; # < 0.05 vs. HFdys by 1-way ANOVA.