Aggregation of tau protein in the brain is associated with a class of neurodegenerative diseases known as tauopathies. FK506 binding protein 51 kDa (FKBP51, encoded by ) forms a mature chaperone complex with Hsp90 that prevents tau degradation. In this study, we have shown that tau levels are reduced throughout the brains of mice. Recombinant FKBP51 and Hsp90 synergized to block tau clearance through the proteasome, resulting in tau oligomerization. Overexpression of FKBP51 in a tau transgenic mouse model revealed that FKBP51 preserved the species of tau that have been linked to Alzheimer’s disease (AD) pathogenesis, blocked amyloid formation, and decreased tangle load in the brain. Alterations in tau turnover and aggregate structure corresponded with enhanced neurotoxicity in mice. In human brains, FKBP51 levels increased relative to age and AD, corresponding with demethylation of the regulatory regions in the gene. We also found that higher FKBP51 levels were associated with AD progression. Our data support a model in which age-associated increases in FKBP51 levels and its interaction with Hsp90 promote neurotoxic tau accumulation. Strategies aimed at attenuating FKBP51 levels or its interaction with Hsp90 have the potential to be therapeutically relevant for AD and other tauopathies. 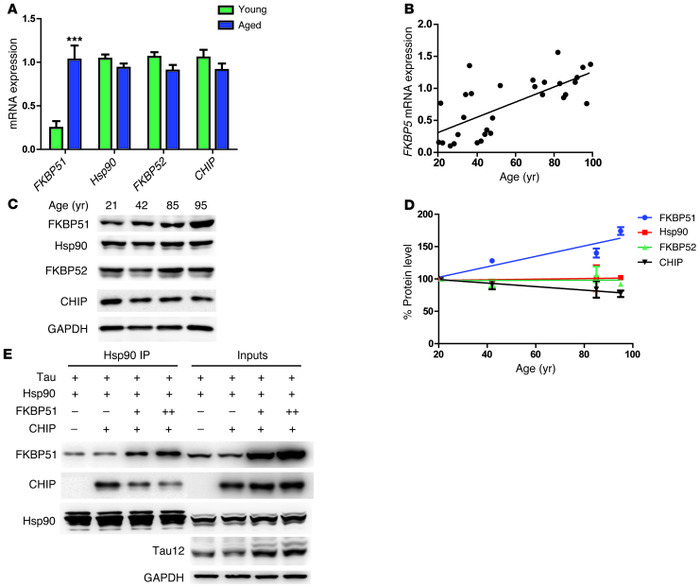