Identification of single-gene causes of steroid-resistant nephrotic syndrome (SRNS) has furthered the understanding of the pathogenesis of this disease. Here, using a combination of homozygosity mapping and whole human exome resequencing, we identified mutations in the aarF domain containing kinase 4 () gene in 15 individuals with SRNS from 8 unrelated families. ADCK4 was highly similar to ADCK3, which has been shown to participate in coenzyme Q10 (CoQ10) biosynthesis. Mutations in resulted in reduced CoQ10 levels and reduced mitochondrial respiratory enzyme activity in cells isolated from individuals with SRNS and transformed lymphoblasts. Knockdown of in zebrafish and recapitulated nephrotic syndrome-associated phenotypes. Furthermore, ADCK4 was expressed in glomerular podocytes and partially localized to podocyte mitochondria and foot processes in rat kidneys and cultured human podocytes. In human podocytes, ADCK4 interacted with members of the CoQ10 biosynthesis pathway, including COQ6, which has been linked with SRNS and COQ7. Knockdown of ADCK4 in podocytes resulted in decreased migration, which was reversed by CoQ10 addition. Interestingly, a patient with SRNS with a homozygous frameshift mutation had partial remission following CoQ10 treatment. These data indicate that individuals with SRNS with mutations in or other genes that participate in CoQ10 biosynthesis may be treatable with CoQ10.

Knockdown of ADCK4 decreases the migratory phenotype of podocytes. 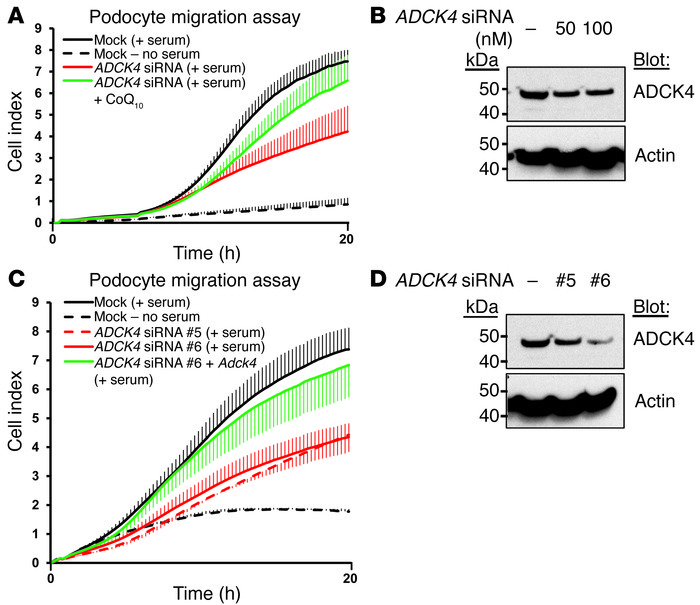