Regulated expression of matrix metalloproteinases (MMPs) and their inhibitors (TIMPs) plays a role in various physiological processes. To determine in vivo how unbalanced expression of these factors can promote or affect the course of pathologies, we knocked out the mouse gelatinase B gene by replacing the catalytic and zinc-binding domains with an antisense-oriented neomycin resistance gene. Adult gelatinase B–deficient mice and wild-type controls could be induced to develop experimental autoimmune encephalomyelitis (EAE) with similar scores for neurologic disease, blood-brain barrier permeability, and central nervous system histopathology. However, whereas diseased control animals showed necrotizing tail lesions with hyperplasia of osteocartilaginous tissue, adult gelatinase B–deficient mice were resistant to this tail pathology. Gelatinase B–deficient mice younger than 4 weeks of age were significantly less susceptible to the development of EAE than were age matched controls and, even as they aged, they remained resistant to tail lesions. These data illustrate that gelatinase B expression plays a role in the development of the immune system and that, in ontogenesis, the propensity to develop autoimmunity is altered by the absence of this MMP. 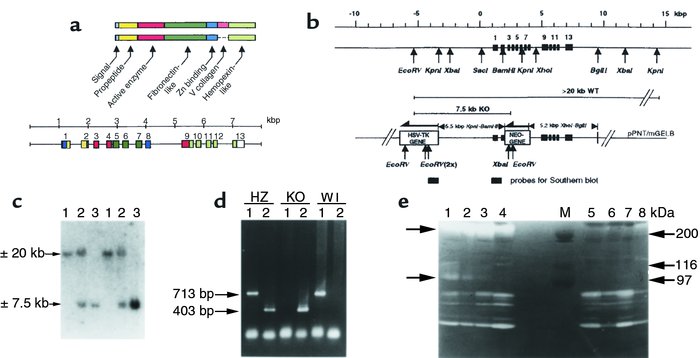 Generation of gelatinase B–deficient mice. () Gelatinase A and B protein domain structure and gene organization of gelatinase B. Gelatinase B contains a type V collagen-like domain, not present in gelatinase A. Each domain is named, and a color code is used to indicate within the mouse genomic structure the exon parts that encode the respective protein domains. () Construction of targeting vector pPNT/mGEL-B. The sequence of the mouse gelatinase B gene (accession number X72794) was extended at the 5′- and 3′-ends, and fragments from the wild-type gene were used to generate the targeting vector pPNT/mGEL-B. Representative restriction sites for subcloning and analysis of wild-type or homologously recombined knockout genes are indicated. The scale bar indicates the fragment sizes in kbp. The orientation of the HSV-TK and NEO genes are antisense to the gelatinase B gene segments as indicated by the arrows. The localization of the 5′-end probes, used for Southern blot analysis, is indicated. () Genotyping by Southern blot analysis. Hybridization of EcoRV-digested tail DNA with a 5′-end probe resulted in bands of approximately 20 kb or 7.5 kb. Lanes 1 show the hybridization patterns of genomic DNA from wild-type mice, whereas lanes 2 are from heterozygote, and lanes 3 from gelatinase B–deficient, mice. () Screening by PCR analysis. Lanes 1 indicate the results of PCR, performed with a primer set to view the wild-type allele. Lanes 2 show the reaction products obtained with a knockout-specific primer set. The resulting genotype is indicated by heterozygous (HZ), knockout (KO), and wild-type (WT). The sizes of the amplified DNA-fragments are indicated in basepairs. () Functional analysis by zymography. Gelatinase activity was determined by SDS/PAGE gelatin substrate conversion. Lanes 1–4 show the analysis of leukocyte supernatants of 4 individual wild-type mice; lanes 5–8, those of 4 gelatinase B–deficient mice. The arrows indicate the gelatinase B zymolysis. Similar to control preparations of recombinant mouse gelatinase B, this zymolysis occurs mainly at >200 kDa (dimer, solid arrow), but also at the monomer position (110 kDa, arrowhead). M, molecular weight standardization.