Tissue-specific alternative splicing is critical for the emergence of tissue identity during development, yet the role of this process in malignant transformation is undefined. Tissue-specific splicing involves evolutionarily conserved, alternative exons that represent only a minority of the total alternative exons identified. Many of these conserved exons have functional features that influence signaling pathways to profound biological effect. Here, we determined that lineage-specific splicing of a brain-enriched cassette exon in the membrane-binding tumor suppressor annexin A7 (ANXA7) diminishes endosomal targeting of the EGFR oncoprotein, consequently enhancing EGFR signaling during brain tumor progression. exon splicing was mediated by the ribonucleoprotein PTBP1, which is normally repressed during neuronal development. PTBP1 was highly expressed in glioblastomas due to loss of a brain-enriched microRNA (miR-124) and to amplification. The alternative splicing trait was present in precursor cells, suggesting that glioblastoma cells inherit the trait from a potential tumor-initiating ancestor and that these cells exploit this trait through accumulation of mutations that enhance EGFR signaling. Our data illustrate that lineage-specific splicing of a tissue-regulated alternative exon in a constituent of an oncogenic pathway eliminates tumor suppressor functions and promotes glioblastoma progression. This paradigm may offer a general model as to how tissue-specific regulatory mechanisms can reprogram normal developmental processes into oncogenic ones. 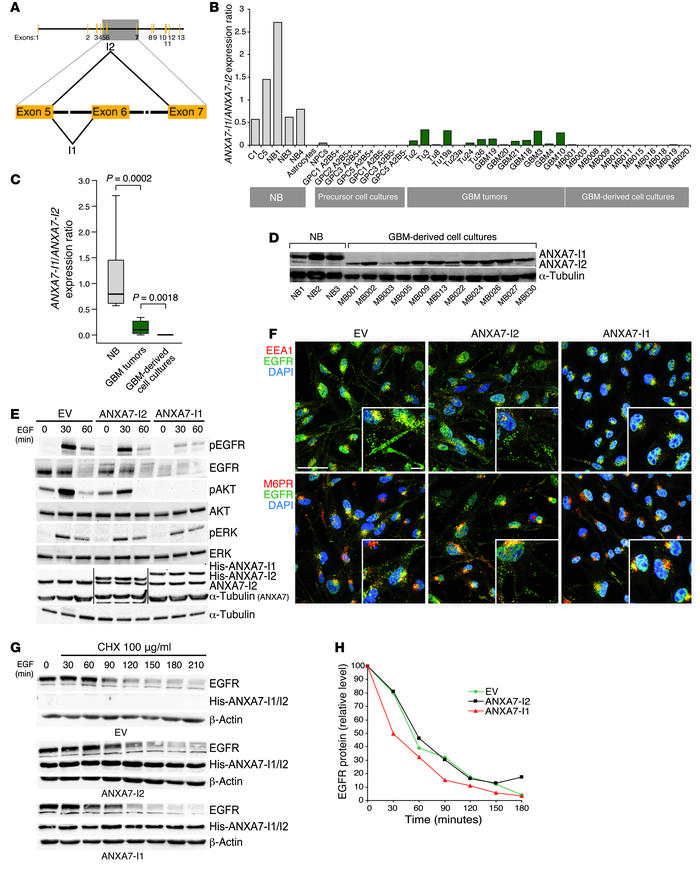