Wnt/β-catenin/TCF signaling stimulates bone formation and suppresses adipogenesis. The hallmarks of skeletal involution with age, on the other hand, are decreased bone formation and increased bone marrow adiposity. These changes are associated with increased oxidative stress and decreased growth factor production, which activate members of the FOXO family of transcription factors. FOXOs in turn attenuate Wnt/β-catenin signaling by diverting β-catenin from TCF- to FOXO-mediated transcription. We show herein that mice lacking , -, and - in bipotential progenitors of osteoblast and adipocytes (expressing Osterix1) exhibited increased osteoblast number and high bone mass that was maintained in old age as well as decreased adiposity in the aged bone marrow. The increased bone mass in the -deficient mice was accounted for by increased proliferation of osteoprogenitor cells and bone formation resulting from upregulation of Wnt/β-catenin signaling and cyclin D1 expression, but not changes in redox balance. Consistent with this mechanism, β-catenin deletion in null cells abrogated both the increased cyclin D1 expression and proliferation. The elucidation of a restraining effect of FOXOs on Wnt signaling in bipotential progenitors suggests that FOXO activation by accumulation of age-associated cellular stressors may be a seminal pathogenetic mechanism in the development of involutional osteoporosis. 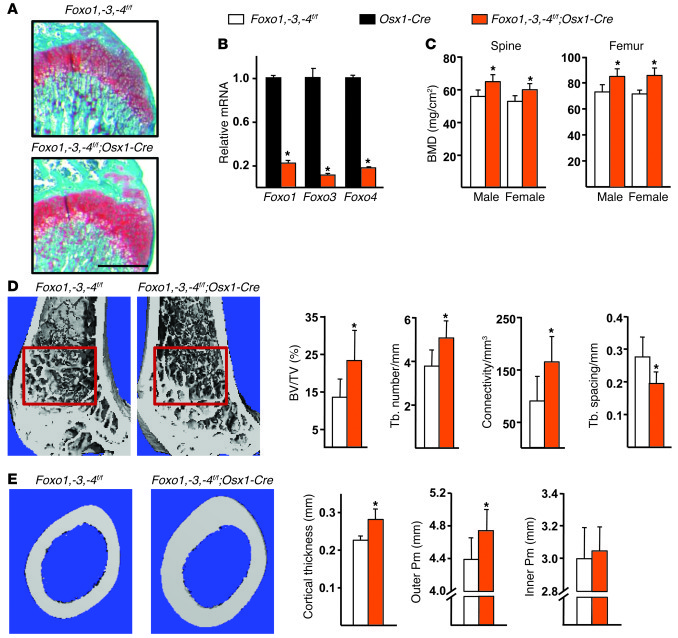