Paracrine communication between different parts of the renal tubule is increasingly recognized as an important determinant of renal function. Previous studies have shown that changes in dietary acid-base load can reverse the direction of apical α-ketoglutarate (αKG) transport in the proximal tubule and Henle’s loop from reabsorption (acid load) to secretion (base load). Here we show that the resulting changes in the luminal concentrations of αKG are sensed by the αKG receptor OXGR1 expressed in the type B and non-A–non-B intercalated cells of the connecting tubule (CNT) and the cortical collecting duct (CCD). The addition of 1 mM αKG to the tubular lumen strongly stimulated Cl–-dependent HCO3– secretion and electroneutral transepithelial NaCl reabsorption in microperfused CCDs of wild-type mice but not mice. Analysis of alkali-loaded mice revealed a significantly reduced ability of mice to maintain acid-base balance. Collectively, these results demonstrate that OXGR1 is involved in the adaptive regulation of HCO3– secretion and NaCl reabsorption in the CNT/CCD under acid-base stress and establish αKG as a paracrine mediator involved in the functional coordination of the proximal and the distal parts of the renal tubule.

OXGR1 is expressed in type B and non-A–non-B intercalated cells of the CNT and the CCD. 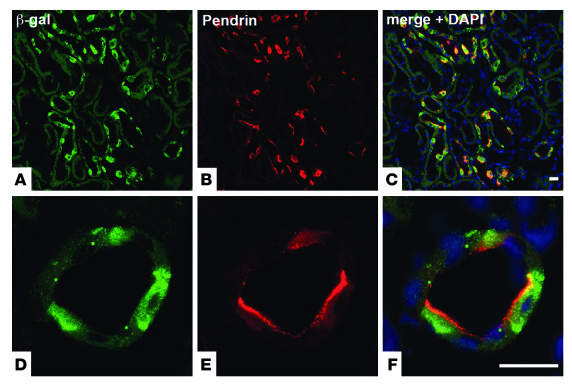 () Immunostaining with anti–β-galactosidase antibody (green) shows that OXGR1 is expressed in a subset of cells in the renal cortex. () Immunolocalization of pendrin (red) in the apical membrane of type B and non-A–non-B intercalated cells. () Coimmunostaining with anti–β-galactosidase and anti-pendrin antibodies demonstrates that OXGR1 and pendrin are expressed in the same cells. Higher-magnification views of images in – are shown in –, respectively. Nuclei (DNA) are stained with DAPI (blue, and ). Scale bars: 50 μm.