The majority of patients with cancer undergo at least one surgical procedure as part of their treatment. Severe postsurgical infection is associated with adverse oncologic outcomes; however, the mechanisms underlying this phenomenon are unclear. Emerging evidence suggests that neutrophils, which function as the first line of defense during infections, facilitate cancer progression. Neutrophil extracellular traps (NETs) are extracellular neutrophil-derived DNA webs released in response to inflammatory cues that trap and kill invading pathogens. The role of NETs in cancer progression is entirely unknown. We report that circulating tumor cells become trapped within NETs in vitro under static and dynamic conditions. In a murine model of infection using cecal ligation and puncture, we demonstrated microvascular NET deposition and consequent trapping of circulating lung carcinoma cells within DNA webs. NET trapping was associated with increased formation of hepatic micrometastases at 48 hours and gross metastatic disease burden at 2 weeks following tumor cell injection. These effects were abrogated by NET inhibition with DNAse or a neutrophil elastase inhibitor. These findings implicate NETs in the process of cancer metastasis in the context of systemic infection and identify NETs as potential therapeutic targets.

CLP promotes the development of micrometastases, which is attenuated by treatment with DNAse 1 and NEi. 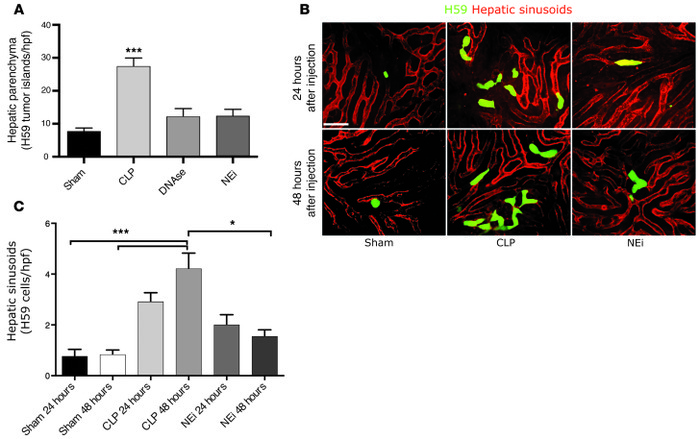 H59 cells were injected via the spleen 24 hours after CLP. () Quantification of micrometastatic foci demonstrated increased numbers of tumor islands at 48 hours after intrasplenic injection in mice subjected to CLP compared with those after sham surgery. Systemic administration of DNAse 1 or NEi after CLP is associated with decreased micrometastases compared with CLP alone. () Representative images of tumor cells trapped within hepatic sinusoidal spaces in mice subjected to sham surgery, CLP, and NEi after CLP at 24 and 48 hours following intrasplenic injection of 5 × 105 H59 cells. Scale bars: 40 μm. () To further demonstrate that adherent tumor cells persist and are able to grow in this model of sepsis, individual tumor cells (as depicted in ) were quantified within the liver at 24 and 48 hours after intrasplenic injection. Quantification of individual tumor cells within hepatic sinusoids reveals increased numbers at both 24 and 48 hours after intrasplenic injection in mice subjected to CLP compared with sham. Systemic administration of NEi after CLP resulted in decreased numbers of tumor cells at both 24 and 48 hours compared with CLP alone. Data were acquired using = 3–5 mice per group. Quantification was performed by counting the number of cells per 5–10 hpf per experiment (×20). * < 0.05, *** < 0.0001 compared with control, DNAse, and sham. Significance was determined using 1-way ANOVA with Tukey’s HSD post-hoc analysis.