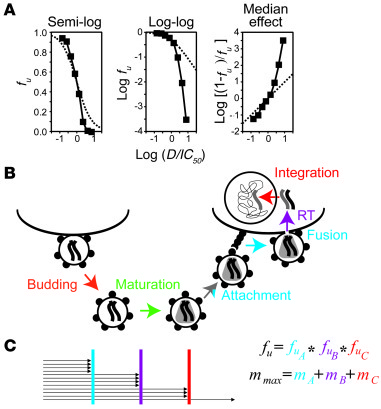 () Representations of the dose-response curves for the PI ATV. Primary CD4+ T cells were infected with viruses generated in the presence of various ATV concentrations, and was measured as previously described (). Left panel: conventional semi-log dose-response curve in which is plotted against log (normalized by ). Conventional plots obscure the differences between the ATV curve and the curve for a hypothetical drug with the same and an value of 1 (dotted line). Middle panel: log-log of the dose-response curve. Right panel: median effect plot, log [(1 – )/] vs. log /. This plot, based on Equation 2, linearizes most dose-response curves, resulting in lines whose slopes are equal to the slope parameter in Equations 1 and 2. This plot illustrates the steep slope and upward inflection of PI dose-response curves. () PIs may inhibit multiple steps in the life cycle. PIs block maturation of the virus particle (green arrow). Since maturation begins concomitantly with budding, an effect on budding is possible. Viruses that fail to mature due to the action of PIs could be blocked at downstream steps including entry, reverse transcription, and integration. () If PIs block multiple steps, then Bliss independence predicts that the fraction of successful infection events is the product of the fraction of viruses that pass each block. The maximal slope of the overall dose-response curve is the sum of the slopes of the dose-response curves for each step (Supplemental Appendix 1).