Nanoparticle-based flow virometry for the analysis of individual virions

Nanoparticle-based flow virometry for the analysis of individual virions

While flow cytometry has been used to analyze the antigenic composition of individual cells, the antigenic makeup of viral particles is still characterized predominantly in bulk. Here, we describe a technology, “flow virometry,” that can be used for antigen detection on individual virions. The technology is based on binding magnetic nanoparticles to virions, staining the virions with monoclonal antibodies, separating the formed complexes with magnetic columns, and characterizing them with flow cytometers. We used this technology to study the distribution of two antigens (HLA-DR and LFA-1) that HIV-1 acquires from infected cells among individual HIV-1 virions. Flow virometry revealed that the antigenic makeup of virions from a single preparation is heterogeneous. This heterogeneity could not be detected with bulk analysis of viruses. Moreover, in two preparations of the same HIV-1 produced by different cells, the distribution of antigens among virions was different. In contrast, HIV-1 of two different HIV-1 genotypes replicating in the same cells became somewhat antigenically similar. This nanotechnology allows the study of virions in bodily fluids without virus propagation and in principle is not restricted to the analysis of HIV, but can be applied to the analysis of the individual surface antigenic makeup of any virus.

Outline of the flow virometry procedure. 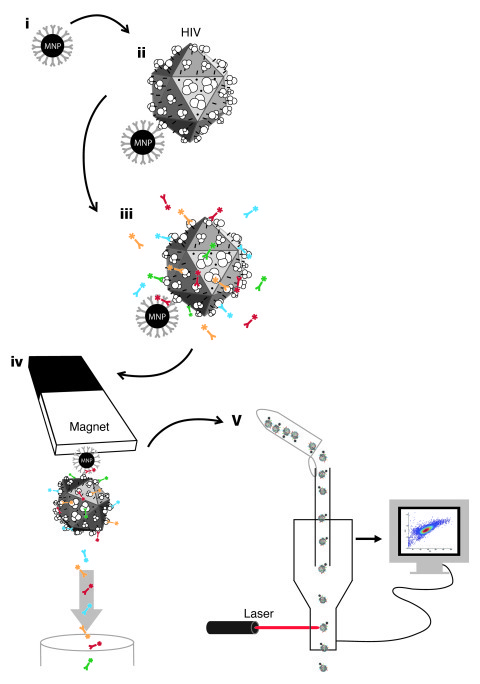