During human pregnancy, a subset of placental cytotrophoblasts (CTBs) differentiates into cells that aggressively invade the uterus and its vasculature, anchoring the progeny and rerouting maternal blood to the placenta. In preeclampsia (PE), CTB invasion is limited, reducing placental perfusion and/or creating intermittent flow. This syndrome, affecting 4%–8% of pregnancies, entails maternal vascular alterations (e.g., high blood pressure, proteinuria, and edema) and, in some patients, fetal growth restriction. The only cure is removal of the faulty placenta, i.e., delivery. Previously, we showed that defective CTB differentiation contributes to the placental component of PE, but the causes were unknown. Here, we cultured CTBs isolated from PE and control placentas for 48 hours, enabling differentiation and invasion. In various severe forms of PE, transcriptomics revealed common aberrations in CTB gene expression immediately after isolation, including upregulation of , which resolved in culture. The addition of SEMA3B to normal CTBs inhibited invasion and recreated aspects of the PE phenotype. Additionally, SEMA3B downregulated VEGF signaling through the PI3K/AKT and GSK3 pathways, effects that were observed in PE CTBs. We propose that, in severe PE, the in vivo environment dysregulates CTB gene expression; the autocrine actions of the upregulated molecules (including SEMA3B) impair CTB differentiation, invasion and signaling; and patient-specific factors determine the signs.

SEMA3B expression was high in the placenta and upregulated in sPE. 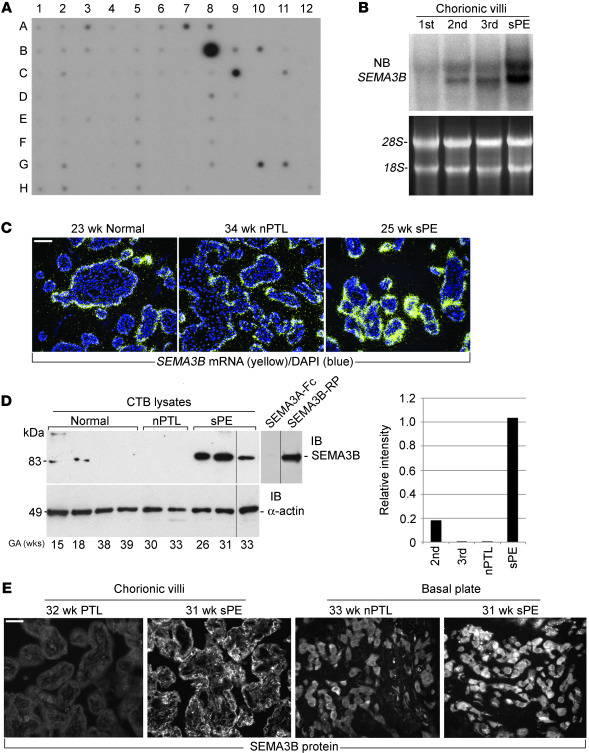 () Binding of a 32P-SEMA3B probe to a multiple tissue expression array revealed high placental expression (coordinate B8). () Northern hybridization of polyA+ RNA extracted from chorionic villi and pooled from 3 placentas showed that expression increased over gestation and was highest in sPE ( = 3 replicates). () In situ hybridization (3 placentas per group) confirmed enhanced mRNA expression in the STB layer of the chorionic villi in sPE (25 weeks) as compared with normal pregnancy (23 weeks) and nPTL (34 weeks). () Immunoblotting of CTB lysates (15 μg per lane) showed that SEMA3B protein expression was low to undetectable in control cells from normal placentas (15–39 weeks). In all cases, expression was higher in sPE (26–33 weeks) as compared with nPTL (30, 33 weeks). A protein of the expected r was detected in COS-1 cells transfected with SEMA3B but not in those transfected with SEMA3A-Fc. Vertical lines denote noncontiguous lanes from the same gel. The relative intensity of the bands quantified by densitometry is also shown. The values for each sample type were averaged and expressed relative to the α-actin loading controls. The entire experiment was repeated twice. () Staining tissue sections with anti-SEMA3B showed a sPE-associated upregulation of immunoreactivity associated with the trophoblast components of chorionic villi and among extravillous CTBs within the basal plate ( = 5 per group). Trophoblasts were identified by staining adjacent tissue sections with anti–cytokeratin-8/18 (data not shown). Scale bars: 100 μm ( and ). NB, Northern blot; GA, gestational age; RP, recombinant protein.