The use of monoclonal antibodies (mAbs) as therapeutic tools has increased dramatically in the last decade and is now one of the mainstream strategies to treat cancer. Nonetheless, it is still not completely understood how mAbs mediate tumor cell elimination or the effector cells that are involved. Using intravital microscopy, we found that antibody-dependent phagocytosis (ADPh) by macrophages is a prominent mechanism for removal of tumor cells from the circulation in a murine tumor cell opsonization model. Tumor cells were rapidly recognized and arrested by liver macrophages (Kupffer cells). In the absence of mAbs, Kupffer cells sampled tumor cells; however, this sampling was not sufficient for elimination. By contrast, antitumor mAb treatment resulted in rapid phagocytosis of tumor cells by Kupffer cells that was dependent on the high-affinity IgG-binding Fc receptor (FcγRI) and the low-affinity IgG-binding Fc receptor (FcγRIV). Uptake and intracellular degradation were independent of reactive oxygen or nitrogen species production. Importantly, ADPh prevented the development of liver metastases. Tumor cell capture and therapeutic efficacy were lost after Kupffer cell depletion. Our data indicate that macrophages play a prominent role in mAb-mediated eradication of tumor cells. These findings may help to optimize mAb therapeutic strategies for patients with cancer by helping us to aim to enhance macrophage recruitment and activity. 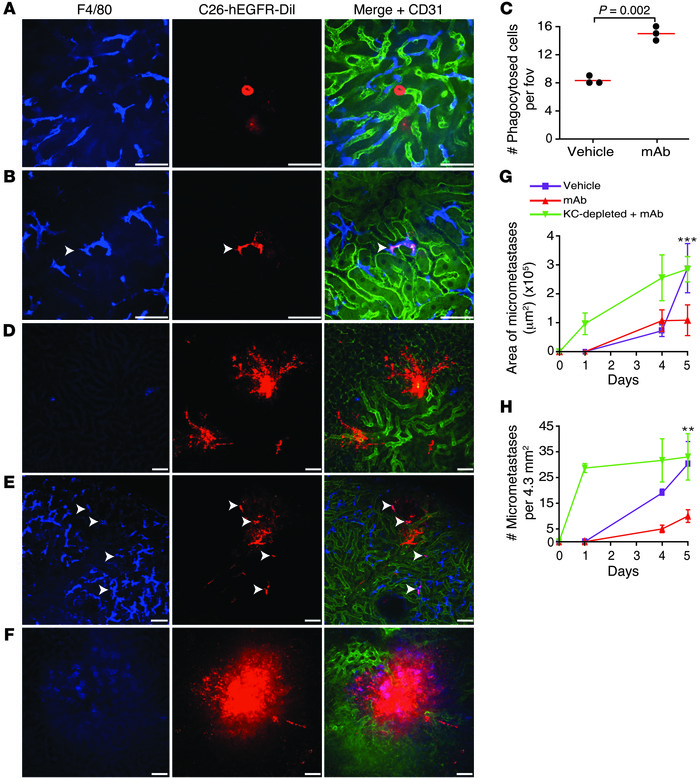