Recent data point to the contribution of P-glycoprotein (P-gp) to digoxin elimination. On the basis of clinical observations of patients in whom digoxin levels decreased considerably when treated with rifampin, we hypothesized that concomitant rifampin therapy may affect digoxin disposition in humans by induction of P-gp. We compared single-dose (1 mg oral and 1 mg intravenous) pharmacokinetics of digoxin before and after coadministration of rifampin (600 mg/d for 10 days) in 8 healthy volunteers. Duodenal biopsies were obtained from each volunteer before and after administration of rifampin. The area under the plasma concentration time curve (AUC) of oral digoxin was significantly lower during rifampin treatment; the effect was less pronounced after intravenous administration of digoxin. Renal clearance and half-life of digoxin were not altered by rifampin. Rifampin treatment increased intestinal P-gp content 3.5 ± 2.1–fold, which correlated with the AUC after oral digoxin but not after intravenous digoxin. P-gp is a determinant of the disposition of digoxin. Concomitant administration of rifampin reduced digoxin plasma concentrations substantially after oral administration but to a lesser extent after intravenous administration. The rifampin-digoxin interaction appears to occur largely at the level of the intestine. Therefore, induction of intestinal P-gp could explain this new type of drug-drug interaction. 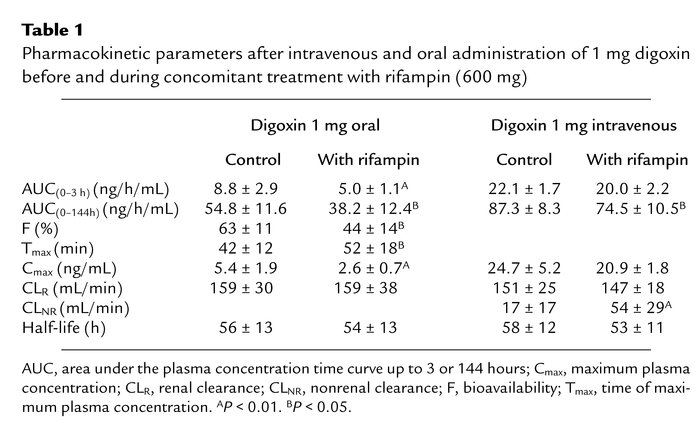