Find articles by George, A. in: JCI | PubMed | Google Scholar

Hypokalemic periodic paralysis (HypoPP) is a familial skeletal muscle disorder that presents with recurrent episodes of severe weakness lasting hours to days associated with reduced serum potassium (K+). HypoPP is genetically heterogeneous, with missense mutations of a calcium channel (CaV1.1) or a sodium channel (NaV1.4) accounting for 60% and 20% of cases, respectively. The mechanistic link between CaV1.1 mutations and the ictal loss of muscle excitability during an attack of weakness in HypoPP is unknown. To address this question, we developed a mouse model for HypoPP with a targeted CaV1.1 R528H mutation. The Cav1.1 R528H mice had a HypoPP phenotype for which low K+ challenge produced a paradoxical depolarization of the resting potential, loss of muscle excitability, and weakness. A vacuolar myopathy with dilated transverse tubules and disruption of the triad junctions impaired Ca2+ release and likely contributed to the mild permanent weakness. Fibers from the CaV1.1 R528H mouse had a small anomalous inward current at the resting potential, similar to our observations in the NaV1.4 R669H HypoPP mouse model. This “gating pore current” may be a common mechanism for paradoxical depolarization and susceptibility to HypoPP arising from missense mutations in the S4 voltage sensor of either calcium or sodium channels.

Mutations in the skeletal muscle voltage-gated calcium channel (CaV1.1) have been associated with hypokalemic periodic paralysis, but how the pathogenesis of this disorder relates to the functional consequences of mutations was unclear. In this issue of the JCI, Wu and colleagues recapitulate the disease by generating a novel knock-in CaV1.1 mutant mouse and use this model to investigate the cellular and molecular features of pathogenesis. They demonstrated an aberrant muscle cell current conducted through the CaV1.1 voltage-sensor domain (gating pore current) that explains an abnormally depolarized muscle membrane and the failure of muscle action potential firing during challenge with agents known to provoke periodic paralysis. Their work advances understanding of molecular and cellular mechanisms underlying an inherited channelopathy.

Ion channels are ubiquitous membrane proteins that confer selective ionic permeability to the plasmalemma or intracellular membranes and enable a wide variety of important physiological processes, including membrane excitability, synaptic transmission, signal transduction, cell volume regulation, and transcellular ion transport. The vital nature of ion channels is reflected by the existence of inherited disorders caused by mutations in genes that encode these proteins (1–5). These “channelopathies” represent more than 50 human genetic diseases, including several affecting skeletal muscle contraction, such as the periodic paralyses and nondystrophic myotonias (see “Muscle channelopathies”). 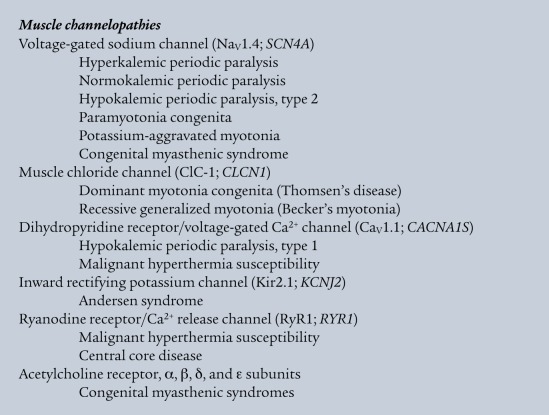 Plasma membrane channels in skeletal muscle are essential for the generation and propagation of action potentials, leading to release of intracellular calcium through the process of excitation-contraction coupling. Ion channel dysfunction can hinder contraction by impairing action potential firing along the membrane. A characteristic symptom of this phenomenon is known as “periodic paralysis,” a form of paroxysmal weakness that occurs in the absence of neuromuscular junction or motor neuron disease. Periodic paralysis is most often thought of as an inherited disease, but certain acquired conditions can produce a similar phenotype. Disturbances in plasma potassium ion concentration often accompany bouts of weakness, and the direction of change has been used to classify the condition as hypokalemic, hyperkalemic, or normokalemic periodic paralysis (6). These conditions are not lethal, because respiratory muscles are spared.

Although the clinical features and inheritance pattern have been known since the first half of the twentieth century, the pathophysiology of periodic paralysis remained mysterious until approximately 30 years ago, when investigators in Germany published their electrophysiological observations on explanted intercostal muscle fibers from subjects with periodic paralysis (7). These studies revealed that resting membrane potential was less negative in fibers from hypokalemic periodic paralysis (HypoPP) subjects compared with normal muscle. Further, exposure of the fibers to low extracellular potassium concentration evoked a further depolarization, whereas this condition hyperpolarized normal muscle membranes. A similar paradoxical depolarization was observed after application of insulin. Both hypokalemia and insulin treatment rendered the fibers electrically inexcitable, owing to inactivation of voltage-gated sodium channels by the strongly depolarized membrane potential. By contrast, muscle fibers from subjects with hyperkalemic periodic paralysis (HyperPP) had normal resting membrane potentials but exhibited depolarization and inexcitability when exposed to elevated extracellular potassium (8). Tetrodotoxin, a highly specific blocker of voltage-gated sodium channels, reversed the depolarization occurring in HyperPP fibers but had no effect on HypoPP muscle. These observations established fundamental features of the pathogenesis of periodic paralysis but left unanswered key questions about the nature of the depolarizing stimulus in the hypokalemic variant.

Advances in the molecular genetics of periodic paralysis revealed that HyperPP is caused exclusively by mutations in SCN4A, the gene encoding the skeletal muscle voltage-gated sodium channel (NaV1.4), whereas HypoPP is caused most often by mutations in CACNA1S, encoding the pore-forming subunit of an L-type voltage-gated calcium channel (CaV1.1), and less commonly by SCN4A mutations (2). Although both syndromes are associated with notable allelic heterogeneity, CACNA1S and SCN4A mutations associated with HypoPP are clustered within voltage-sensor domains. A brief digression on the topic of voltage-gated channel structure and function will help clarify the pathophysiological significance of this mutation clustering.

The sodium and calcium channels expressed in nerve, heart, and muscle belong to a superfamily of ion channels that are gated (opened and closed) by changes in membrane potential (9). The main pore-forming α-subunits have a four-fold symmetry consisting of structurally homologous domains (D1–D4), each containing four transmembrane segments that comprise the voltage-sensor domain (S1–S4) and a separate pore domain (S5–S6), important for determining ion selectivity (Figure 1A). The S4 segment, which functions as the main voltage-sensing element, is amphipathic, with basic amino acids (arginine or lysine) at every third position surrounded by hydrophobic residues. Activation of voltage-gated channels is evoked by a membrane depolarization that acts to propel the S4 segments in an outward direction away from the negative electrostatic cell interior. Subsequent conformational changes involving the S6 segment open the ion pore and permit rapid movement of ions through a passageway created by the pore domain.

Voltage-gated sodium and calcium channel structural domains and location of gating pore. (A) Predicted transmembrane topology model of typical voltage-gated sodium or calcium channel. The S4 segments within voltage-sensing domains are indicated by a column of plus (+) signs. The inset illustrates locations of the separate voltage-sensing and pore domains that are repeated four times in the channel protein. (B) A cutaway view showing the pathway through which ionic current or gating pore currents are conducted. The cylinders within the channels represent the S4 segments, and the approximate location of the HypoPP mutation CaV1.1 R528H is indicated. Figure modified from the Journal of General Physiology (23).

The highly conserved S4 segment has received an enormous amount of attention for the past two decades, particularly with regard to the molecular motions that carry its positive charges through the membrane electric field (10, 11). One startling revelation regarding sodium and potassium channels was that the S4 segment becomes accessible to aqueous protein-modifying reagents during gating motions (12, 13). This observation led to the hypothesis that S4 segments travel through the membrane via a water-filled cavity. Even more intriguing was the observation that histidine substitutions for arginine residues within the S4 segment generate a proton pore that is separate from the main ion permeation pathway in the pore domain (14). The current flowing through the voltage-sensor pore (also known as the gating pore) was termed the “omega” or “gating pore” current (Figure 1B).

Because these S4 segment histidine substitutions created unnatural channels, astute researchers investigating the functional consequences of channelopathy-associated mutations recognized that this mechanism might explain the pathophysiology of HypoPP. Specifically, sodium channel mutations associated with HypoPP that replace S4 segment arginine residues create channels that conduct an anomalous inward current at resting membrane potentials (15–18). The in vivo relevance of this mechanism was demonstrated subsequently using a mouse model of the disease (NaV1.4 R669H knock-in), in which an anomalous inward current was detected in muscle cells at hyperpolarized potentials (19). These investigations offered a molecular explanation for HypoPP caused by sodium channel mutations, but did not address what happens with the more common calcium channel mutations. Furthermore, prior studies of mutations engineered in human CaV1.1 did not reveal a consistent and compelling pattern of channel dysfunction that would explain the phenotype, in part because of the difficulty of expressing this channel in heterologous cell systems.

To address the pathogenesis of HypoPP caused by CACNA1S mutations, Wu and colleagues in the laboratory of Stephen Cannon report in this issue of the JCI the investigation of a novel knock-in mouse model of the disease (20). Mice were generated that express the most common human HypoPP mutation (CaV1.1 R528H), a histidine substitution for the outermost arginine residue of the D2/S4 segment in CaV1.1. Although animals did not exhibit spontaneous attacks of weakness, muscle strength was reduced more severely in male mice, consistent with the reduced penetrance in females observed for human HypoPP (6). Muscles from knock-in mice exhibited features previously observed in human HypoPP fibers, including reduced contractile force and paradoxical membrane depolarization evoked by low extracellular potassium or by glucose and insulin challenge. Muscle fibers from homozygous knock-in R528H mice exhibited a –15-mV depolarization of the resting membrane potential similar to human HypoPP fibers. In addition, these mice exhibited a chronic vacuolar myopathy similar to that observed in patients with this disorder.

A critical observation made by these investigators was the presence of an anomalous inward current in mutant mouse muscle fibers consistent with gating pore current rather than ionic current conducted through a known ion channel (20). These findings offered a mechanistic link between calcium channel mutation and attacks of muscle weakness. Anomalous gating pore current creates a precarious balance between the inward and outward currents that maintain the membrane potential. Factors such as hypokalemia that transiently depress potassium currents, which are required to maintain a normal resting membrane potential, can render the muscle severely depolarized and, consequently, inexcitable owing to inactivation of sodium channels.

Now that a common mechanism of evoking gating pore current has been established in HypoPP, several new and intriguing questions emerge. Can aberrant gating pore current be selectively blocked, and would this prevent attacks of paralysis? Do carbonic anhydrase inhibitors such as acetazolamide and dichlorphenamide, which are effective treatments for HypoPP regardless of genotype, affect gating pore current directly or indirectly? Are there triggering factors that act specifically by potentiating gating pore current? Finally, what is the basis for vacuolar myopathy, and why is there a sex-biased penetrance of mutations? These and other important questions can now be addressed using the mouse model developed by Wu and colleagues.

Although HypoPP was the first channelopathy for which aberrant gating pore current was implicated in disease pathogenesis, many other S4 mutations in voltage-gated sodium, calcium, and potassium channels have been found in other inherited disorders of membrane excitability, including epilepsy and cardiac arrhythmia syndromes (21). Are some of these conditions also “gating pore-opathies”? A recent study demonstrating that an S4 segment mutation in the cardiac sodium channel (NaV1.5 R219H) associated with dilated cardiomyopathy evokes an aberrant proton current (22) suggests that this may be a more widespread phenomenon.