The detection of estrogen receptor-α (ERα) in osteoblasts and osteoclasts over 20 years ago suggested that direct effects of estrogens on both of these cell types are responsible for their beneficial effects on the skeleton, but the role of ERα in osteoblast lineage cells has remained elusive. In addition, estrogen activation of ERα in osteoclasts can only account for the protective effect of estrogens on the cancellous, but not the cortical, bone compartment that represents 80% of the entire skeleton. Here, we deleted α at different stages of differentiation in murine osteoblast lineage cells. We found that ERα in osteoblast progenitors expressing Osterix1 (Osx1) potentiates Wnt/β-catenin signaling, thereby increasing proliferation and differentiation of periosteal cells. Further, this signaling pathway was required for optimal cortical bone accrual at the periosteum in mice. Notably, this function did not require estrogens. The osteoblast progenitor α mediated a protective effect of estrogens against endocortical, but not cancellous, bone resorption. ERα in mature osteoblasts or osteocytes did not influence cancellous or cortical bone mass. Hence, the ERα in both osteoblast progenitors and osteoclasts functions to optimize bone mass but at distinct bone compartments and in response to different cues. 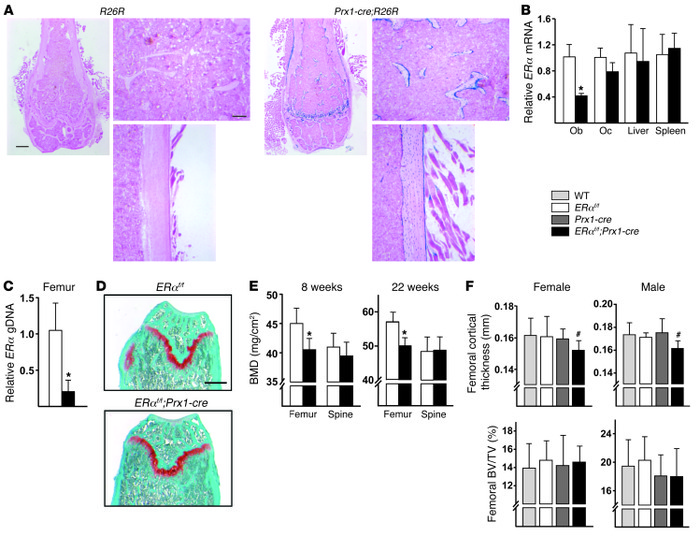