is the most frequently mutated oncogene in human cancers. Despite decades of effort, anti-RAS therapies have remained elusive. Isoprenylcysteine carboxylmethyltransferase (ICMT) methylates RAS and other CaaX-containing proteins, but its potential as a target for cancer therapy has not been fully evaluated. We crossed a mouse, which is a model of pancreatic ductal adenocarcinoma (PDA), with a mouse harboring a floxed allele of . Surprisingly, we found that ICMT deficiency dramatically accelerated the development and progression of neoplasia. ICMT-deficient pancreatic ductal epithelial cells had a slight growth advantage and were resistant to premature senescence by a mechanism that involved suppression of cyclin-dependent kinase inhibitor 2A (p16INK4A) expression. ICMT deficiency precisely phenocopied Notch1 deficiency in the model by exacerbating pancreatic intraepithelial neoplasias, promoting facial papillomas, and derepressing Wnt signaling. Silencing in human osteosarcoma cells decreased Notch1 signaling in response to stimulation with cell-surface ligands. Additionally, targeted silencing of , the homolog of , resulted in defects in wing development, consistent with Notch loss of function. Our data suggest that ICMT behaves like a tumor suppressor in PDA because it is required for Notch1 signaling. 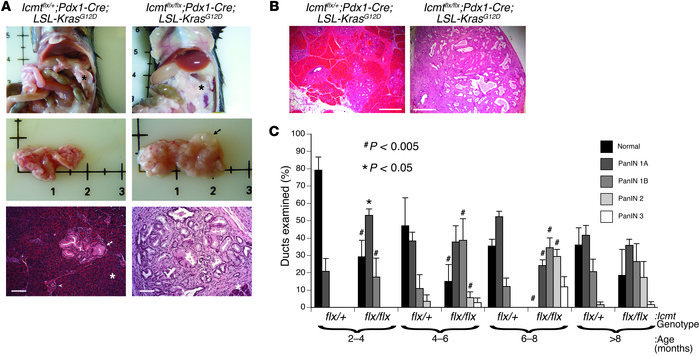 () Pancreatic pathology of representative 4-month-old mice of the indicated genotypes. Top panels show the gross specimen; asterisks indicate the pancreas in situ and rulers show centimeter marks. Middle panels: The ICMT-deficient pancreas to the right is larger, with fibrotic nodules and a cyst (arrow). Lower panels show H&E-stained sections from the same pancreata. Both normal ducts (arrowhead) and PanINs (arrow) are visible in the mouse, whereas mice have more extensive PanINs. Normal acinar tissue (asterisk) is scant in the ICMT-deficient mice. Scale bars: 100 μm. () H&E-stained sections of pancreata from 8-month-old animals of the indicated genotypes reveal more extensive PanIN lesions in the ICMT-deficient animals (right), in which most of the acinar tissue is replaced by PanINs and fibrosis. Scale bars: 500 μm. () Quantification of the percentage of normal ducts, PanIN-1A, 1B, 2, and 3 per section of pancreas from animals of the genotypes () and () sacrificed at the indicated ages. Data shown are the mean ± SEM from at least four animals of each age and genotype.