Alternative splicing of nucleoredoxin-like 1 () results in 2 isoforms of the rod-derived cone viability factor. The truncated form (RdCVF) is a thioredoxin-like protein secreted by rods that promotes cone survival, while the full-length isoform (RdCVFL), which contains a thioredoxin fold, is involved in oxidative signaling and protection against hyperoxia. Here, we evaluated the effects of these different isoforms in 2 murine models of rod-cone dystrophy. We used adeno-associated virus (AAV) to express these isoforms in mice and found that both systemic and intravitreal injection of engineered AAV vectors resulted in RdCVF and RdCVFL expression in the eye. Systemic delivery of AAV92YF vectors in neonates resulted in earlier onset of RdCVF and RdCVFL expression compared with that observed with intraocular injection using the same vectors at P14. We also evaluated the efficacy of intravitreal injection using a recently developed photoreceptor-transducing AAV variant (7m8) at P14. Systemic administration of AAV92YF-RdCVF improved cone function and delayed cone loss, while AAV92YF-RdCVFL increased rhodopsin mRNA and reduced oxidative stress by-products. Intravitreal 7m8-RdCVF slowed the rate of cone cell death and increased the amplitude of the photopic electroretinogram. Together, these results indicate different functions for isoforms in the retina and suggest that RdCVF gene therapy has potential for treating retinal degenerative disease. 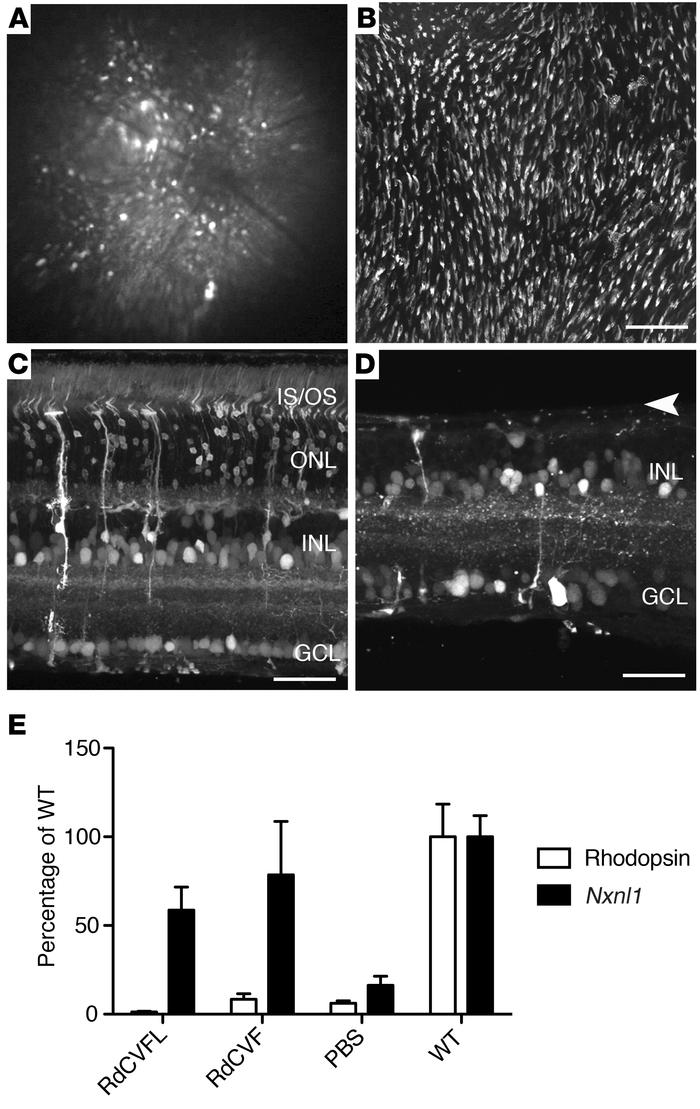 () Injection of AAV92YF-scCAG-GFP resulted in strong pan-retinal GFP expression, as shown in a fundus image of a P45 WT mouse. () Retinal flat mount showing large numbers of GFP-expressing photoreceptors in the central retina of a WT mouse 45 days after injection. () AAV92YF transduced cells in the GCL, INL, and ONL in a WT mouse. () Injection of AAV92YF led to gene expression across all layers of the retina in a P45 mouse. The ONL was significantly reduced at this time point (arrowhead). () qRT-PCR showing high levels of mRNA from eyes injected with AAV92YF-scCAG-RdCVF or AAV92YF-scCAG-RdCVFL. PBS-injected animals had markedly reduced levels of mRNA. Levels of rhodopsin expression were low across conditions in eyes. Eyes were collected at P35 from 3 animals injected in the tail vein at P1 and raised in a normal light/dark cycle. One eye was taken from each animal, and opposite eyes were used for the cone labeling and quantification shown in Figure . Scale bars: 40 μm (); 50 μm ( and ).