Chronic obstructive lung disease is characterized by persistent abnormalities in epithelial and immune cell function that are driven, at least in part, by infection. Analysis of parainfluenza virus infection in mice revealed an unexpected role for innate immune cells in IL-13–dependent chronic lung disease, but the upstream driver for the immune axis in this model and in humans with similar disease was undefined. We demonstrate here that lung levels of IL-33 are selectively increased in postviral mice with chronic obstructive lung disease and in humans with very severe chronic obstructive pulmonary disease (COPD). In the mouse model, IL-33/IL-33 receptor signaling was required for and mucin gene expression, and gene expression was localized to a virus-induced subset of airway serous cells and a constitutive subset of alveolar type 2 cells that are both linked conventionally to progenitor function. In humans with COPD, gene expression was also associated with and mucin gene expression, and induction was traceable to a subset of airway basal cells with increased capacities for pluripotency and ATP-regulated release of IL-33. Together, these findings provide a paradigm for the role of the innate immune system in chronic disease based on the influence of long-term epithelial progenitor cells programmed for excess IL-33 production.

Effect of IL1RL1 blockade in the postviral mouse model. 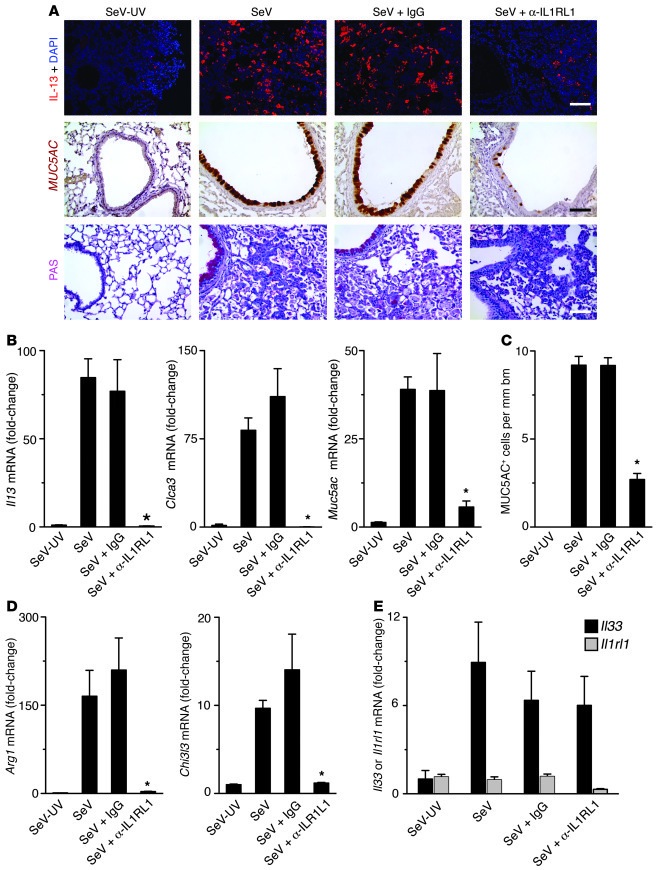 Mice were inoculated with SeV-UV or SeV, then treated as indicated with anti-IL1RL1 mAb or control IgG1 mAb (IgG) on dpi 12–49, and examined at dpi 49. () Representative photomicrographs of mouse lung sections for IL-13 and MUC5AC immunostaining and PAS staining. Scale bars: 200 μm. () Lung levels of , , and mRNA. () Levels of MUC5AC+ airway epithelial cells. (). Lung levels of and mRNA. () Lung levels of and mRNA. (–) Values represent mean ± SEM ( = 7 per group, representative of 3 experiments). * < 0.05 versus untreated SeV.