Thyroid hormone is well known for its profound direct effects on cardiovascular function and metabolism. Recent evidence, however, suggests that the hormone also regulates these systems indirectly through the central nervous system. While some of the molecular mechanisms underlying the hormone’s central control of metabolism have been identified, its actions in the central cardiovascular control have remained enigmatic. Here, we describe a previously unknown population of parvalbuminergic neurons in the anterior hypothalamus that requires thyroid hormone receptor signaling for proper development. Specific stereotaxic ablation of these cells in the mouse resulted in hypertension and temperature-dependent tachycardia, indicating a role in the central autonomic control of blood pressure and heart rate. Moreover, the neurons exhibited intrinsic temperature sensitivity in patch-clamping experiments, providing a new connection between cardiovascular function and core temperature. Thus, the data identify what we believe to be a novel hypothalamic cell population potentially important for understanding hypertension and indicate developmental hypothyroidism as an epigenetic risk factor for cardiovascular disorders. Furthermore, the findings may be beneficial for treatment of the recently identified patients that have a mutation in thyroid hormone receptor α1.

Effect of the in vivo ablation of AHA pv cells in pvCre mice. 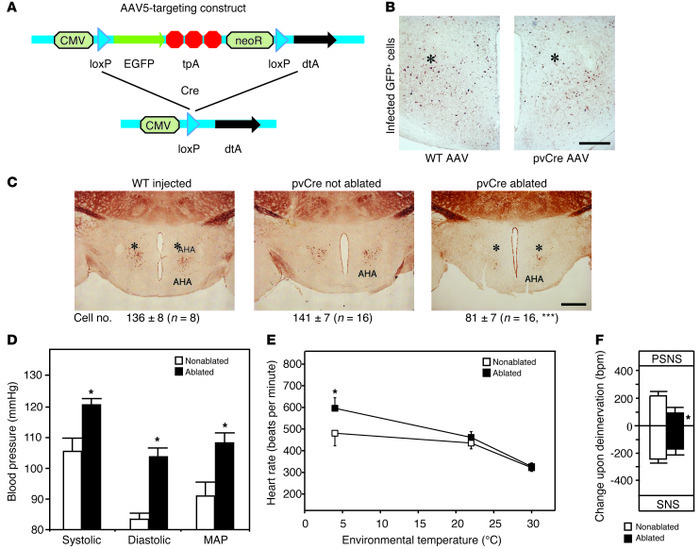