MicroRNA-146a is a therapeutic target and biomarker for peripartum cardiomyopathy

MicroRNA-146a is a therapeutic target and biomarker for peripartum cardiomyopathy

Peripartum cardiomyopathy (PPCM) is a life-threatening pregnancy-associated cardiomyopathy in previously healthy women. Although PPCM is driven in part by the 16-kDa N-terminal prolactin fragment (16K PRL), the underlying molecular mechanisms are poorly understood. We found that 16K PRL induced microRNA-146a (miR-146a) expression in ECs, which attenuated angiogenesis through downregulation of . 16K PRL stimulated the release of miR-146a–loaded exosomes from ECs. The exosomes were absorbed by cardiomyocytes, increasing miR-146a levels, which resulted in a subsequent decrease in metabolic activity and decreased expression of , , and . Mice with cardiomyocyte-restricted knockout (CKO mice) exhibited a PPCM-like phenotype and displayed increased cardiac miR-146a expression with coincident downregulation of , , , and . Blocking miR-146a with locked nucleic acids or antago-miRs attenuated PPCM in CKO mice without interrupting full-length prolactin signaling, as indicated by normal nursing activities. Finally, miR-146a was elevated in the plasma and hearts of PPCM patients, but not in patients with dilated cardiomyopathy. These results demonstrate that miR-146a is a downstream-mediator of 16K PRL that could potentially serve as a biomarker and therapeutic target for PPCM. 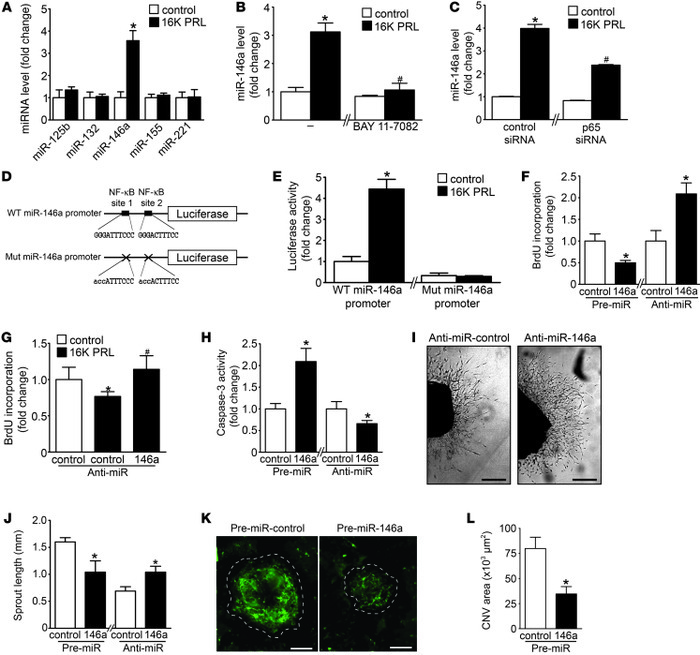