Pregnancy and obesity are frequently associated with diminished insulin sensitivity, which is normally compensated for by an expansion of the functional β cell mass that prevents chronic hyperglycemia and development of diabetes mellitus. The molecular basis underlying compensatory β cell mass expansion is largely unknown. We found in rodents that β cell mass expansion during pregnancy and obesity is associated with changes in the expression of several islet microRNAs, including miR-338-3p. In isolated pancreatic islets, we recapitulated the decreased miR-338-3p level observed in gestation and obesity by activating the G protein–coupled estrogen receptor GPR30 and the glucagon-like peptide 1 (GLP1) receptor. Blockade of miR-338-3p in β cells using specific anti-miR molecules mimicked gene expression changes occurring during β cell mass expansion and resulted in increased proliferation and improved survival both in vitro and in vivo. These findings point to a major role for miR-338-3p in compensatory β cell mass expansion occurring under different insulin resistance states.

Identification of miRNAs differentially expressed in the islets of pregnant rats. 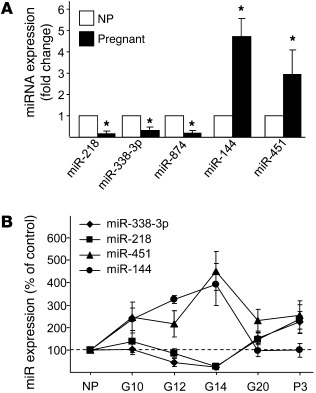 () Expression of the indicated miRNAs was measured by qRT-PCR in the islets of female rats at day 14 of gestation. Results are expressed as fold changes and correspond to the mean ± SD of 4 nonpregnant (NP) control and 4 pregnant rats. () Expression of the indicated miRNAs was determined by qRT-PCR in islets from nonpregnant rats and from pregnant rats at days 10, 12, 14, and 20 of gestation (G10, G12, G14, and G20, respectively) and 3 days postpartum (P3). Results (mean ± SD of 4 animals per group) are expressed as percent of the level of each miRNA in nonpregnant rats. * < 0.05 vs. nonpregnant, ANOVA.