The role of mitochondria in aging

The role of mitochondria in aging

Over the last decade, accumulating evidence has suggested a causative link between mitochondrial dysfunction and major phenotypes associated with aging. Somatic mitochondrial DNA (mtDNA) mutations and respiratory chain dysfunction accompany normal aging, but the first direct experimental evidence that increased mtDNA mutation levels contribute to progeroid phenotypes came from the mtDNA mutator mouse. Recent evidence suggests that increases in aging-associated mtDNA mutations are not caused by damage accumulation, but rather are due to clonal expansion of mtDNA replication errors that occur during development. Here we discuss the caveats of the traditional mitochondrial free radical theory of aging and highlight other possible mechanisms, including insulin/IGF-1 signaling (IIS) and the target of rapamycin pathways, that underlie the central role of mitochondria in the aging process.

Schematic model of the oxidative phosphorylation system and the production of ROS. 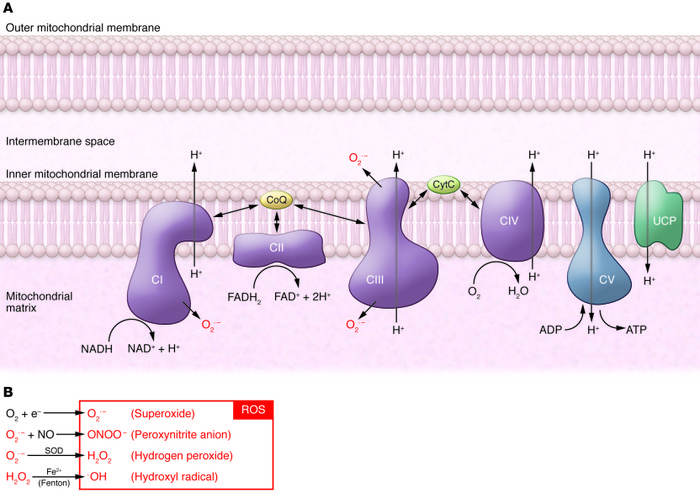 () ATP is generated by oxidative phosphorylation conducted by the four RC complexes (CI–CIV) and ATP synthase (CV) located in the inner mitochondrial membrane. Energy released by the electron transfer from NADH and FADH2 to O2 is used to pump protons (H+) via CI, CIII, and CIV. The proton gradient across the inner mitochondrial membrane drives ATP production via ATP synthase. The proton gradient can be dissipated by re-entry of protons to the mitochondrial matrix through uncoupling proteins (UCPs), which leads to uncoupling of respiration and ATP synthesis. () ROS are formed as a byproduct of oxidative phosphorylation. Superoxide is an abundant ROS in the cell and is generated by CI and CIII. Cells protect themselves from oxidative damage by expressing a variety of antioxidant enzymes that convert ROS into less harmful byproducts. Superoxide anion is converted to hydrogen peroxide by manganese SOD. Hydrogen peroxide is then converted to water by glutathione peroxidase, the most abundant peroxidase in the cytosol and mitochondria. Even though hydrogen peroxide is not substantially harmful for the cell, it can be converted to the highly reactive hydroxyl radical (OH•) in the presence of transition metals via the Fenton reaction. CytC, cytochrome C; CoQ, coenzyme Q10.