The tumor microenvironment plays a significant role in colitis-associated cancer (CAC). Intestinal myofibroblasts (IMFs) are cells in the intestinal lamina propria secreting factors that are known to modulate carcinogenesis; however, the physiological role of IMFs and signaling pathways influencing CAC have remained unknown. Tumor progression locus 2 (Tpl2) is a MAPK that regulates inflammatory and oncogenic pathways. In this study we addressed the role of Tpl2 in CAC using complete and tissue-specific ablation of Tpl2 in mutant mice. Tpl2-deficient mice did not exhibit significant differences in inflammatory burdens following azoxymethane (AOM)/dextran sodium sulfate (DSS) administration compared with wild-type mice; however, the mutant mice developed significantly increased numbers and sizes of tumors, associated with enhanced epithelial proliferation and decreased apoptosis. Cell-specific ablation of Tpl2 in IMFs, but not in intestinal epithelial or myeloid cells, conferred a similar susceptibility to adenocarcinoma formation. Tpl2-deficient IMFs upregulated HGF production and became less sensitive to the negative regulation of HGF by TGF-β3. In vivo inhibition of HGF-mediated c-Met activation blocked early, enhanced colon dysplasia in Tpl2-deficient mice, indicating that Tpl2 normally suppresses the HGF/c-Met pathway. These findings establish a mesenchyme-specific role for Tpl2 in the regulation of HGF production and suppression of epithelial tumorigenesis.

mice, but not or mice, exhibit increased susceptibility to CAC. 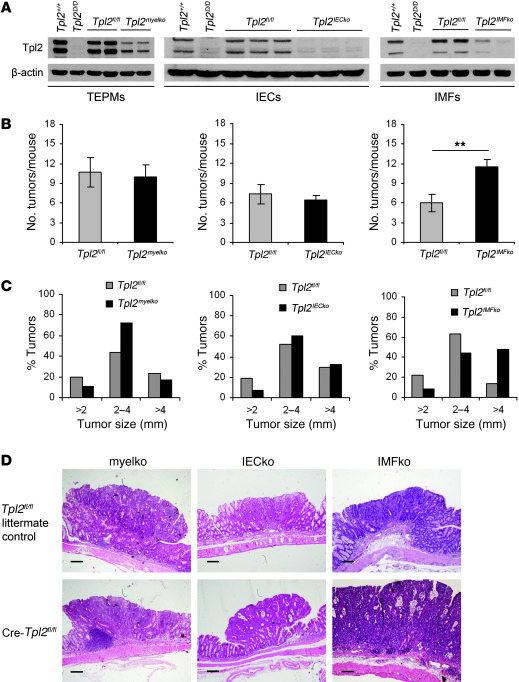 mice were crossed with LysM-Cre, villin-Cre and ColVI-Cre mice in order to accomplish cell-specific deletion of Tpl2 in myeloid cells (), IECs (), and intestinal myofibroblasts (), respectively. () Western blot analysis in protein lysate from thioglycolate elicited peritoneal macrophages (TEPMs), IECs, and IMFs was used in each case to verify efficient deletion of Tpl2 protein. () These mice were subjected to the AOM/DSS protocol of CAC. Tumor multiplicity was measured in , , and mice in comparison to littermate controls on day 60 after AOM/DSS administration. Data represent mean ± SEM from one of 2 (for mice) or 3 (for and ) experiments performed. = 5; ** < 0.01. () Size distribution of colonic tumors in , , and mice and their respective littermate controls at the end of the experimental protocol. The data shown are cumulative of 2 (for mice) or 3 (for and ) experiments performed. () Representative images from H&E staining of colon tissues from , , and mice and their respective littermate controls on day 60 of the regime. Scale bars: 200 μm.