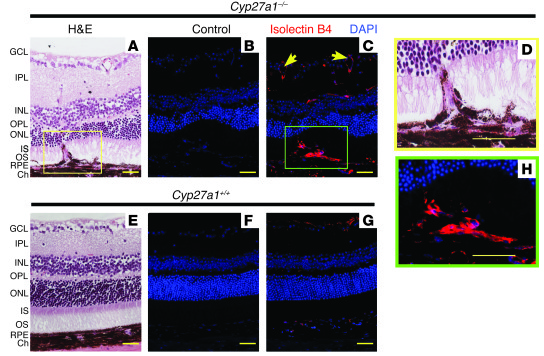 Panels are representative of stainings carried out on adjacent sections cut through pathologies in mice (–, and ) or through a corresponding region in mice (–). (, , and ) H&E staining. (, , and ) Staining with isolectin B4, a marker for blood vessels, conjugated to DyLight 594 fluorophore (in red); nuclei were stained with DAPI (in blue). and are enlarged areas of and , respectively. and are control sections with isolectin B4 omitted. Yellow arrows () indicate blood vessels in the GCL. Scale bars: 30 μm. Original magnification, ×400.