Pancreatic agenesis is a human disorder caused by defects in pancreas development. To date, only a few genes have been linked to pancreatic agenesis in humans, with mutations in pancreatic and duodenal homeobox 1 (PDX1) and pancreas-specific transcription factor 1a (PTF1A) reported in only 5 families with described cases. Recently, mutations in GATA6 have been identified in a large percentage of human cases, and a GATA4 mutant allele has been implicated in a single case. In the mouse, Gata4 and Gata6 are expressed in several endoderm-derived tissues, including the pancreas. To analyze the functions of GATA4 and/or GATA6 during mouse pancreatic development, we generated pancreas-specific deletions of Gata4 and Gata6. Surprisingly, loss of either Gata4 or Gata6 in the pancreas resulted in only mild pancreatic defects, which resolved postnatally. However, simultaneous deletion of both Gata4 and Gata6 in the pancreas caused severe pancreatic agenesis due to disruption of pancreatic progenitor cell proliferation, defects in branching morphogenesis, and a subsequent failure to induce the differentiation of progenitor cells expressing carboxypeptidase A1 (CPA1) and neurogenin 3 (NEUROG3). These studies address the conserved and nonconserved mechanisms underlying GATA4 and GATA6 function during pancreas development and provide a new mouse model to characterize the underlying developmental defects associated with pancreatic agenesis.

At E10.5, fewer endoderm cells are differentiated into Pdx1+ pancreatic progenitor cells, due partially to the loss of Gata4 regulation of gene expression. 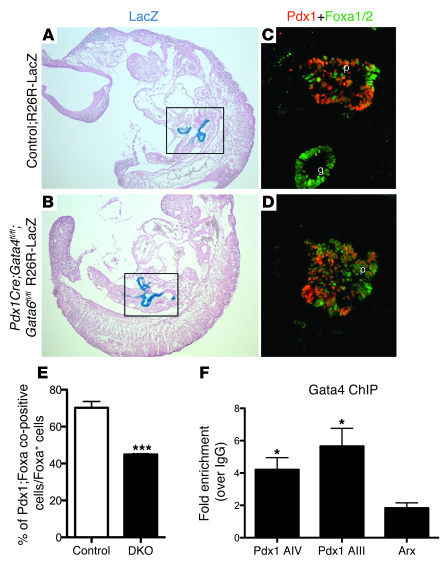 (–) Representative sagittal sections from E10.5 LacZ-stained control () and DKO () embryos. The regions containing the pancreatic buds are highlighted by boxes. Pancreatic bud formation appears morphologically normal in the DKO embryo (boxed areas in and ). ( and ) Immunofluorescence costaining using anti-Pdx1 and anti-Foxa1/2 antibodies shows that there is a smaller percentage of Pdx1+ pancreatic progenitor cells relative to the number of Foxa1/a2+ cells in the pancreatic endodermal region of DKO embryos ( vs. ). () Cell quantification of the relative number of Pdx1+ cells within the Foxa1/a2+ foregut endoderm ( = 4), p, pancreas; g, gut. *** < 0.001. () Real-time qPCR analysis of DNA products immunoprecipitated by an anti-Gata4 antibody in 266-6 cells. Gata consensus sequences within Pdx1 enhancer area III (–1841 bp from the ATG) and Pdx1 enhancer area IV (–6010 bp from the ATG) are bound by the Gata4 protein. Gata4 does not bind the Arx promoter, which serves as a negative control. * < 0.05. Original magnification, ×50 ( and ); ×200 ( and ).