The G1 kinase CDK4 is amplified or overexpressed in some human tumors and promotes tumorigenesis by inhibiting known tumor suppressors. Here, we report that CDK4 deficiency markedly accelerated lymphoma development in the Eμ- transgenic mouse model of B lymphoma and that silencing or loss of CDK4 augmented the tumorigenic potential of -driven mouse and human B cell lymphoma in transplant models. Accelerated disease in CDK4-deficient Eμ- transgenic mice was associated with rampant genomic instability that was provoked by dysregulation of a FOXO1/RAG1/RAG2 pathway. Specifically, CDK4 phosphorylated and inactivated FOXO1, which prevented FOXO1-dependent induction of and transcription. CDK4-deficient Eμ- B cells had high levels of the active form of FOXO1 and elevated RAG1 and RAG2. Furthermore, overexpression of RAG1 and RAG2 accelerated lymphoma development in a transplant model, with RAG1/2-expressing tumors exhibiting hallmarks of genomic instability. Evaluation of human tumor samples revealed that CDK4 expression was markedly suppressed, while FOXO1 expression was elevated, in several subtypes of human non-Hodgkin B cell lymphoma. Collectively, these findings establish a context-specific tumor suppressor function for CDK4 that prevents genomic instability, which contributes to B cell lymphoma. Furthermore, our data suggest that targeting CDK4 may increase the risk for the development and/or progression of lymphoma. 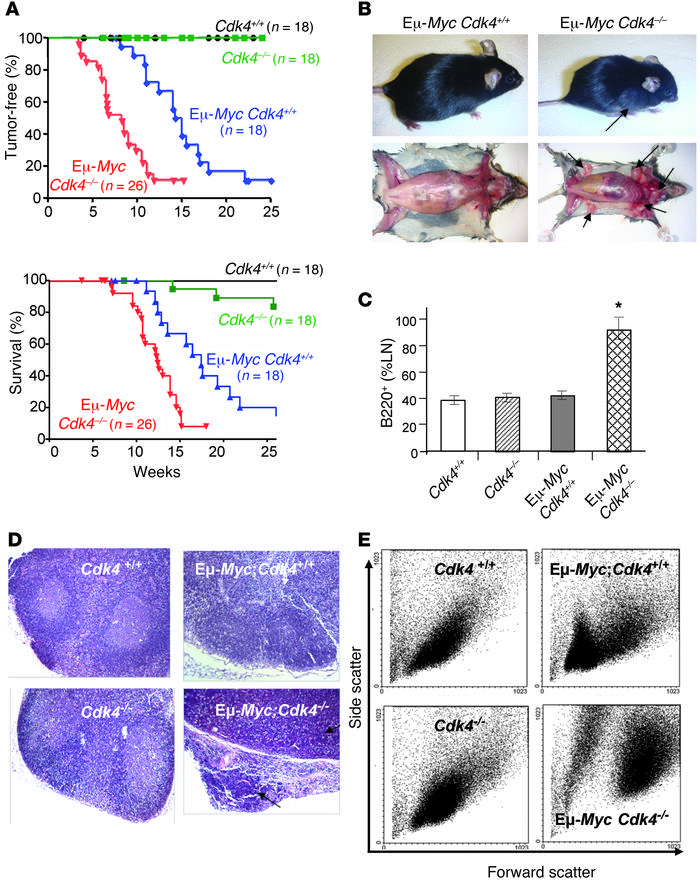