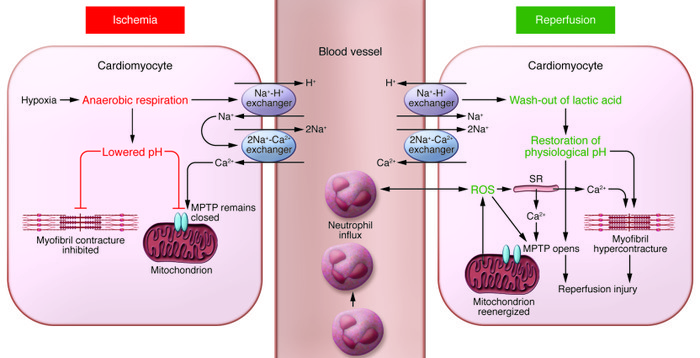 During acute myocardial ischemia, the absence of oxygen switches cell metabolism to anaerobic respiration, resulting in the production of lactate and a drop in intracellular pH. This induces the Na+-H+ exchanger to extrude H+ and results in intracellular Na+ overload, which activates the 2Na+-Ca2+ exchanger to function in reverse to extrude Na+ and leads to intracellular Ca2+ overload. The Na+-K+ ATPase ceases to function in ischemia, exacerbating intracellular Na+ overload. The acidic conditions during ischemia prevent the opening of the MPTP and cardiomyocyte hypercontracture at this time. During reperfusion, the electron transport chain is reactivated, generating ROS. Other sources of ROS include xanthine oxidase (endothelial cells) and NADPH oxidase (neutrophils). ROS mediate myocardial reperfusion injury by inducing the opening of the MPTP, acting as a neutrophil chemoattractant, and mediating dysfunction of the sarcoplasmic reticulum (SR). This contributes to intracellular Ca2+ overload and damages the cell membrane by lipid peroxidation, inducing enzyme denaturation and causing direct oxidative damage to DNA. Reperfusion and reactivation of the Na+-H+ exchanger result in washout of lactic acid, resulting in the rapid restoration of physiological pH, which releases the inhibitory effect on MPTP opening and cardiomyocyte contracture. The restoration of the mitochondrial membrane potential drives calcium into the mitochondria, which can also induce MPTP opening. Several hours after the onset of myocardial reperfusion, neutrophils accumulate in the infarcted myocardial tissue in response to the release of the chemoattractants ROS, cytokines, and activated complement.