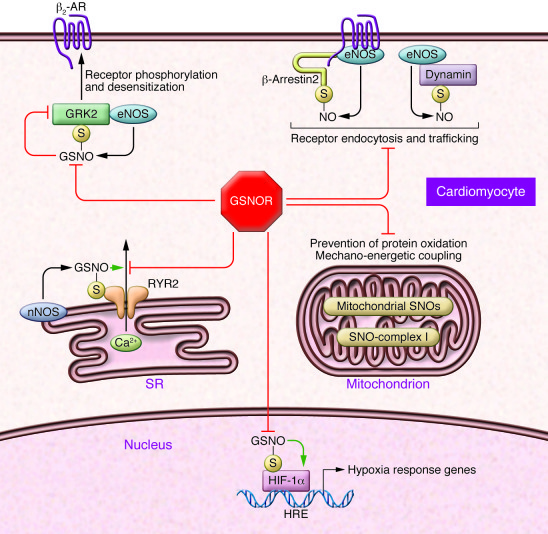 The central roles are highlighted for the denitrosylase GSNOR in physiologic control of β2-AR signaling, SR calcium release, HIF-1α responses, and mitochondrial function. -nitrosylation reactions that have been proven by genetic criteria to occur through the intermediacy of GSNO include those targeting GRK2, RYR2, and HIF-1α. Ligand-dependent -nitrosylation of GRK2, β-arrestin2, and dynamin is eNOS dependent. eNOS is complexed with GRK2, β-arrestin2, and dynamin, as depicted. Coordinate titration of -nitrosylation (envisioned via receptor-coupled activity of transnitrosylases and denitrosylases) across multiple steps in these pathways determine net signaling responses. The effects of GSNOR (from observations in mice) manifest as increases in cardiac output under basal conditions, a persistent state of systemic vasodilation, and protection from ischemic insult, establishing a central role for GSNO in cardiovascular hemodynamics and oxygen delivery. Effects of GSNOR on mitochondrial targets are inferred from studies using GSNO. HRE, hypoxia response element.