The DNA damage response (DDR) is a complex regulatory network that is critical for maintaining genome integrity. Posttranslational modifications are widely used to ensure strict spatiotemporal control of signal flow, but how the DDR responds to environmental cues, such as changes in ambient oxygen tension, remains poorly understood. We found that an essential component of the ATR/CHK1 signaling pathway, the human homolog of the Caenorhabditis elegans biological clock protein CLK-2 (HCLK2), associated with and was hydroxylated by prolyl hydroxylase domain protein 3 (PHD3). HCLK2 hydroxylation was necessary for its interaction with ATR and the subsequent activation of ATR/CHK1/p53. Inhibiting PHD3, either with the pan-hydroxylase inhibitor dimethyloxaloylglycine (DMOG) or through hypoxia, prevented activation of the ATR/CHK1/p53 pathway and decreased apoptosis induced by DNA damage. Consistent with these observations, we found that mice lacking PHD3 were resistant to the effects of ionizing radiation and had decreased thymic apoptosis, a biomarker of genomic integrity. Our identification of HCLK2 as a substrate of PHD3 reveals the mechanism through which hypoxia inhibits the DDR, suggesting hydroxylation of HCLK2 is a potential therapeutic target for regulating the ATR/CHK1/p53 pathway. 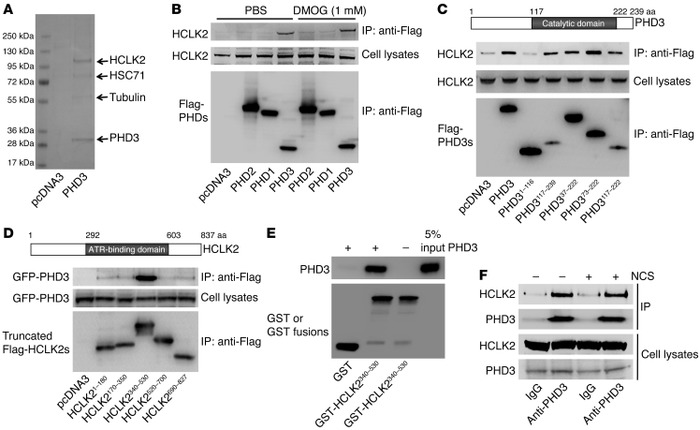