T-helper 1 (Th1) cells are believed to be the major producer of the type 1 cytokine interferon-γ (IFN-γ) in cell-mediated immunity against intracellular infection. We have investigated the ability of macrophages to release type 1 cytokines and their regulatory mechanisms using both in vivo and in vitro models of pulmonary mycobacterial infection. During pulmonary infection by live Mycobacterium bovis bacilli Calmette-Guérin (BCG) in wild-type mice, lung macrophages released interleukin-12 (IL-12), IFN-γ, and tumor necrosis factor-α (TNF-α), and expressed surface activation markers. However, macrophages in infected IL-12–/– mice released TNF-α but not IFN-γ and lacked surface activation makers. In freshly isolated lung macrophages from naive IL-2–/– mice, mycobacteria alone released TNF-α but not IFN-γ, whereas exogenously added IL-12 alone released a minimum of IFN-γ. However, these macrophages released large quantities of IFN-γ upon stimulation with both mycobacteria and IL-12. In contrast, mycobacteria and exogenous IFN-γ released only a minimum of endogenous IFN-γ. Endogenous IL-18 (IFN-γ–inducing factor) played little role in IFN-γ responses by macrophages stimulated by mycobacteria and IL-12. Our data reveal that macrophages are a significant source of type 1 cytokines during mycobacterial infection and that both IL-12 and intracellular pathogens are required for the release of IFN-γ but not TNF-α. These findings suggest that macrophages regulate cell-mediated immunity by releasing not only IL-12 and TNF-α but also IFN-γ and that full activation of IFN-γ response in macrophages is tightly regulated. 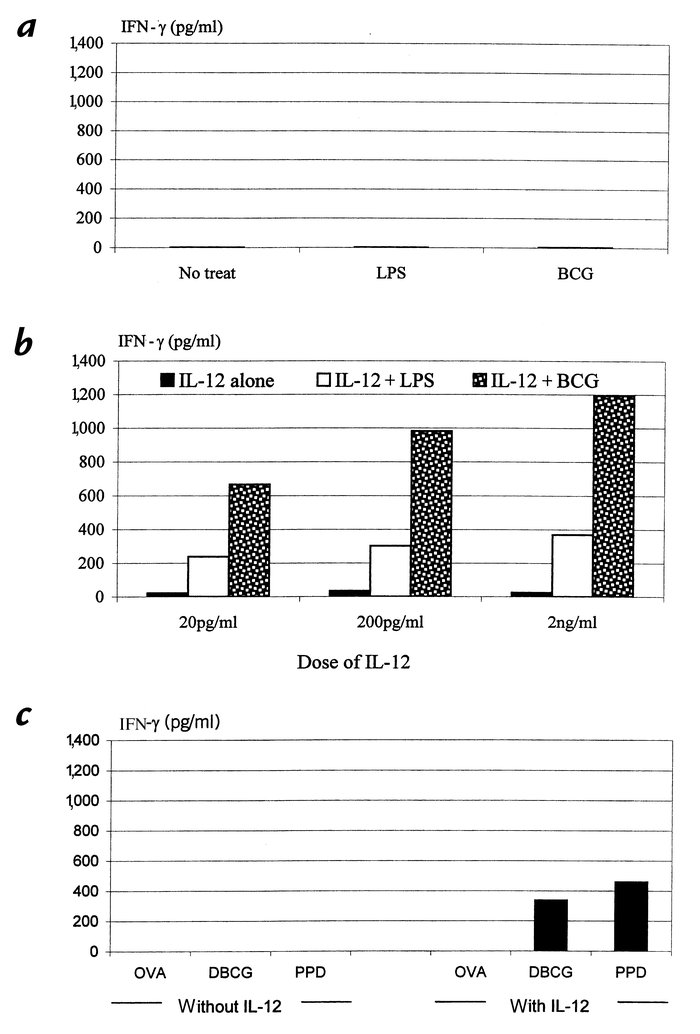 IFN-γ production by freshly isolated lung macrophages from naive IL-12–/– mice. Pulmonary macrophages were isolated and cultured under different conditions. The supernatants collected at 72 h were measured for IFN-γ by ELISA. () Cells cultured with or without LPS (1.6 μg/ml) or live BCG (50 CFU/cell). () Cells cultured with 20 pg/ml, 200 pg/ml, or 2 ng/ml of IL-12 alone or together with 1.6 μg/ml of LPS or 50 CFU/cell of live BCG. () Cells stimulated with 400 μg/ml of OVA, DBCG (50 CFU/cell), or 8 μg/ml of PPD alone or together with 200 pg/ml of IL-12. The results are expressed as the means of duplicate samples and are representative of three to four independent experiments. , ovalbumin; , heat-killed BCG.