Prolonged deprivation of food induces dramatic changes in mammalian metabolism, including the release of large amounts of fatty acids from the adipose tissue, followed by their oxidation in the liver. The nuclear receptor known as peroxisome proliferator–activated receptor α (PPARα) was found to play a role in regulating mitochondrial and peroxisomal fatty acid oxidation, suggesting that PPARα may be involved in the transcriptional response to fasting. To investigate this possibility, PPARα-null mice were subjected to a high fat diet or to fasting, and their responses were compared with those of wild-type mice. PPARα-null mice chronically fed a high fat diet showed a massive accumulation of lipid in their livers. A similar phenotype was noted in PPARα-null mice fasted for 24 hours, who also displayed severe hypoglycemia, hypoketonemia, hypothermia, and elevated plasma free fatty acid levels, indicating a dramatic inhibition of fatty acid uptake and oxidation. It is shown that to accommodate the increased requirement for hepatic fatty acid oxidation, PPARα mRNA is induced during fasting in wild-type mice. The data indicate that PPARα plays a pivotal role in the management of energy stores during fasting. By modulating gene expression, PPARα stimulates hepatic fatty acid oxidation to supply substrates that can be metabolized by other tissues. 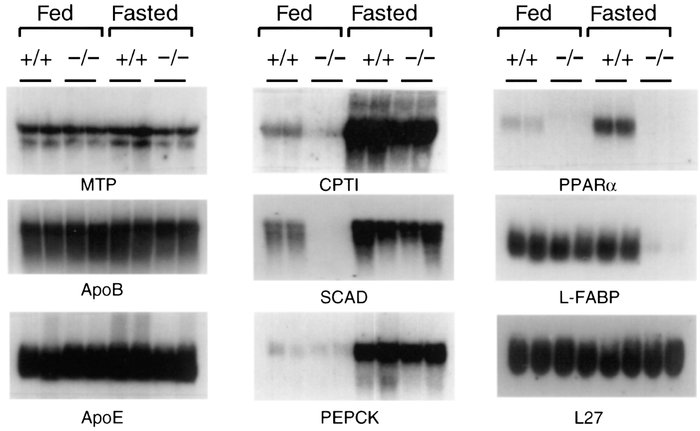 Fasting/feeding has dramatic effects on the expression of several PPAR target genes in a PPARα-dependent manner. Northern blot analysis of RNA from livers of fed and fasted SV129 wild-type or PPARα-null mice. Total RNA was isolated from livers of SV129 wild-type or PPARα-null mice sacrificed at the end of the dark cycle (fed state) or after a 24-hour fast started at the beginning of the light cycle (fasted state). Probes used were as indicated.