Although thyroid hormones are critically important for the coordination of morphogenic processes in the fetus and neonate, premature exposure of the embryo to levels of the hormones present in the adult is detrimental and can result in growth retardation, malformations, and even death. We report here that the pregnant rat uterus expresses extremely high levels of the type 3 iodothyronine deiodinase (D3), which inactivates thyroxine and 3,3′,5-triiodothyronine by 5-deiodination. Both D3 mRNA and activity were present at the implantation site as early as gestational day 9 (E9), when expression was localized using in situ hybridization to uterine mesometrial and antimesometrial decidual tissue. At later stages of gestation, uterine D3 activity remained very high, and the levels exceeded those observed in the placenta and in fetal tissues. After days E12 and E13, as decidual tissues regressed, D3 expression became localized to the epithelial cells lining the recanalized uterine lumen that surrounds the fetal cavity. These findings strongly suggest that the pregnant uterus, in addition to the placenta, plays a critical role in determining the level of exposure of the fetus to maternal thyroid hormones. 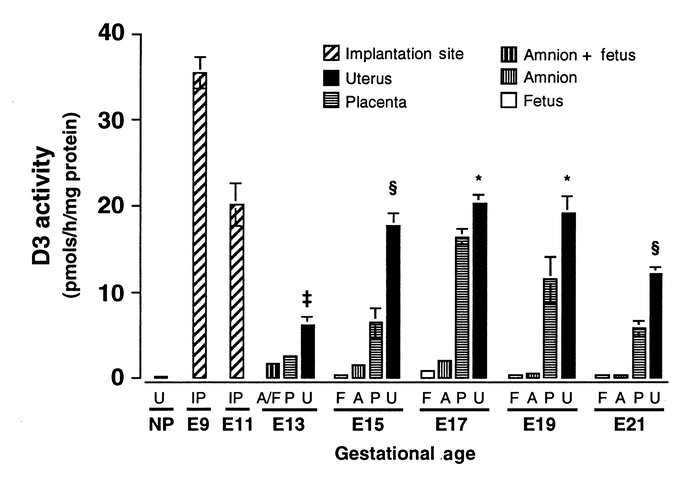