Brown adipose tissue (BAT) is vital for proper thermogenesis during cold exposure in rodents, but until recently its presence in adult humans and its contribution to human metabolism were thought to be minimal or insignificant. Recent studies using PET with 18F-fluorodeoxyglucose (18FDG) have shown the presence of BAT in adult humans. However, whether BAT contributes to cold-induced nonshivering thermogenesis in humans has not been proven. Using PET with 11C-acetate, 18FDG, and 18F-fluoro-thiaheptadecanoic acid (18FTHA), a fatty acid tracer, we have quantified BAT oxidative metabolism and glucose and nonesterified fatty acid (NEFA) turnover in 6 healthy men under controlled cold exposure conditions. All subjects displayed substantial NEFA and glucose uptake upon cold exposure. Furthermore, we demonstrated cold-induced activation of oxidative metabolism in BAT, but not in adjoining skeletal muscles and subcutaneous adipose tissue. This activation was associated with an increase in total energy expenditure. We found an inverse relationship between BAT activity and shivering. We also observed an increase in BAT radio density upon cold exposure, indicating reduced BAT triglyceride content. In sum, our study provides evidence that BAT acts as a nonshivering thermogenesis effector in humans. 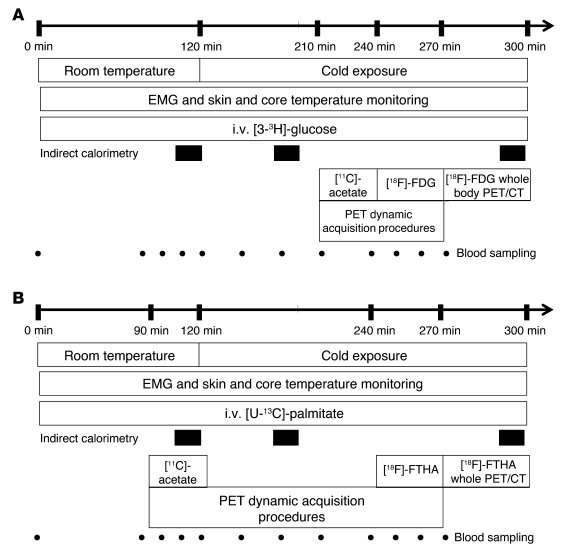