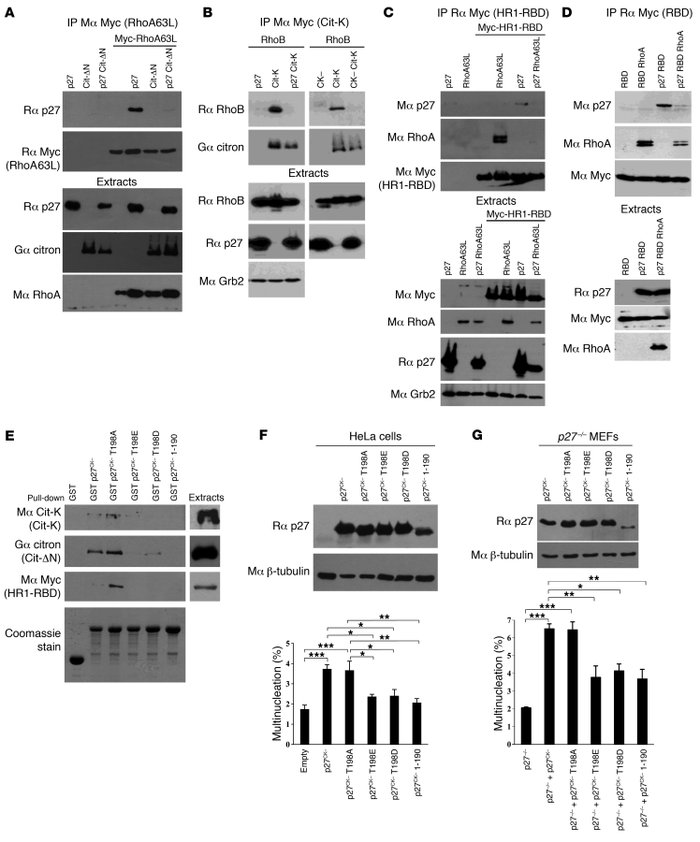 () HEK293 cells were transfected with p27, Myc-RhoA63L, and/or Cit-ΔN. RhoA63L was immunoprecipitated with mouse anti-Myc (9E10) antibodies. The amount of p27 co-immunoprecipitated was determined by probing with rabbit anti-p27 (C19). Immunoprecipitated RhoA63L was visualized by reprobing with rabbit anti-Myc (A14). The amount of transfected proteins present in cell extracts is shown in the lower panels. () HEK293 cells were transfected with p27 or p27CK–, RhoB, and/or Myc–citron-K. Citron-K was immunoprecipitated using mouse anti-Myc (9E10). The amount of RhoB bound to citron-K was determined by probing with anti-RhoB (119) antibodies. After stripping, membranes were reprobed with goat anti-citron (C20). Amounts of transfected proteins are shown in the lower panels. ( and ) HEK293 cells were transfected or not with p27, eGFP-RhoA63L, and the HR1-RBD domain of citron-K () or with p27, eGFP-RhoA, and the RBD domain of citron-K (). Citron-K domains were immunoprecipitated with rabbit anti-Myc (A14) antibodies. Membranes were probed successively using mouse anti-p27 (F8), mouse anti-RhoA (26C4), and mouse anti-Myc (9E10) antibodies. The amount of each transfected protein is shown in the lower panels. () The last 8 aa of p27 are required for binding to citron-K, and phosphorylation of p27 on Thr198 prevents citron-K binding. Pull-down experiments were performed with HEK293 cells transfected with citron-K, Cit-ΔN, or HR1-RBD using the indicated GST-p27 beads. The amounts of proteins bound to the beads or transfected in the input extracts were determined by immunoblot using the indicated antibodies. The amount of GST beads used in the assays was visualized by Coomassie staining. () The ability to bind citron-K is required for p27CK– to cause multinucleation. HeLa cells were transfected with empty vector or vectors encoding the indicated p27CK– mutants. Immunoblot shows the expression level of each p27mutant. In this exposure, endogenous p27 is not visible. Multinucleated cells were counted (200–500 positive cells/condition, = 5) using β-catenin and p27 staining to visualize transfected cells. * < 0.05, ** < 0.01, *** < 0.001, 1-way ANOVA with the Tukey-Kramer multiple comparison test; error bars represent SEM. () Immortalized MEFs were infected with p27CK– or different p27CK– mutants. Multinucleated cells were quantified (500 cells/condition, = 3). The level of p27CK– or p27CK– mutants was measured by immunoblot against p27. Results were analyzed as in .