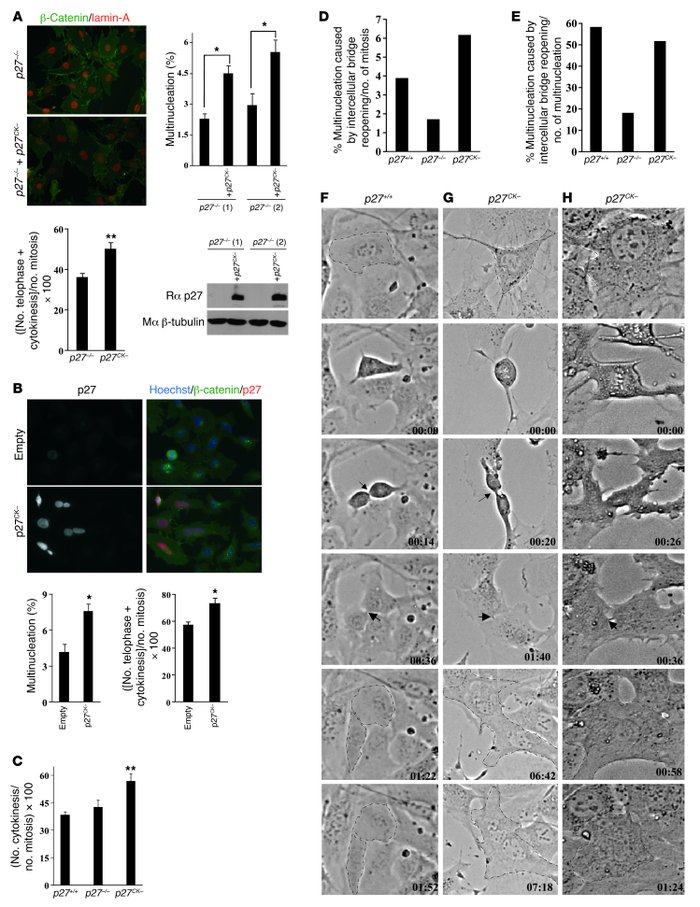 () Multinucleation was quantified (500 cells counted/line, = 3) in two lines of immortalized MEFs infected or not with p27CK– and stained for β-catenin and lamin-A (original magnification, ×400). p27CK– levels following retroviral infection were measured by immunoblot for p27, and β-tubulin levels were used as loading control. Lower graph: For each cell line, the proportion of mitotic cells in telophase and cytokinesis was determined in 50–100 mitotic figures; results are mean of 5 independent experiments. () Overexpression of p27CK– in HeLa cells causes multinucleation. HeLa cells were transfected with either empty vector or a vector encoding p27CK–. Transfected cells were visualized by p27 staining and co-labeled for β-catenin, and 600 p27-positive cells were counted (original magnification, ×400). Graphs show the average number of multinucleated cells in 3 independent experiments. Right graph: number of mitotic cells in telophase and cytokinesis observed in 100 mitotic figures ( = 4). In and , * < 0.05, ** < 0.01, Student’s test. () Number of mitotic cells in cytokinesis in immortalized , , and p27CK– MEFs. One hundred mitotic figures were counted per genotype in 3 independent experiments. Results were analyzed by 1-way ANOVA with the Tukey-Kramer multiple comparison test; versus p27CK–, ** < 0.01. Error bars in – represent SEM. (–) Videomicroscopy of , , and MEFs undergoing mitosis. () Incidence of multinucleation caused by cytokinetic regression relative to the total number of mitotic figures recorded (: = 181; : = 117; : = 243). () Nature of the defect causing multinucleation: multinucleation caused by reopening of the intercellular bridge as a percentage of the total number of multinucleation was determined for each genotype. (–) Examples of phase contrast videomicroscopy of mitotic () and MEFs ( and ). Arrows indicate the intercellular bridge. In , cells undergo mitosis normally until the formation of intercellular bridge, which regresses to form binucleated cells. Original magnification, ×200.