Multinucleation and centrosome amplification in MEFs. 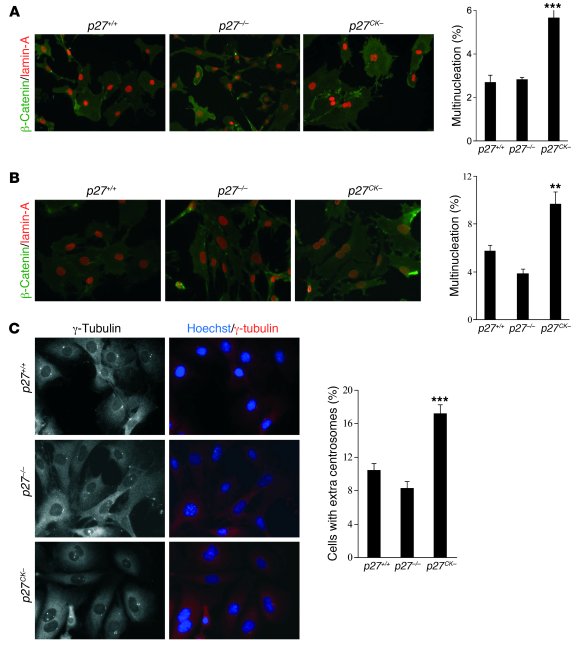 () Primary MEFs (passages 2–3) derived from , , and mice were stained with anti–β-catenin and anti–lamin-A antibodies to visualize plasma membrane and nuclear envelope, respectively (original magnification, ×400). For each experiment, 500 cells were counted per genotype. The graph shows the mean of 3 independent experiments. Results were analyzed by 1-way ANOVA with the Tukey-Kramer multiple comparison test. versus , *** < 0.001. () The number of nuclei per cell was counted in two lines of immortalized MEFs per genotype. Cells were stained as in , and 500 cells per line were counted (original magnification, ×400). The graph shows the average of 4 independent experiments. Statistical analyses were performed as in . versus p27CK–, ** < 0.01. () Centrosomes were visualized by γ-tubulin staining and counted in 300 cells per genotype (original magnification, ×600). Graph shows the average of 2 different MEF lines per genotype in 4 independent experiments. Statistical analyses were performed as in ; versus , *** < 0.001. Error bars in – represent SEM.