While a potential causal factor in Alzheimer’s disease (AD), brain insulin resistance has not been demonstrated directly in that disorder. We provide such a demonstration here by showing that the hippocampal formation (HF) and, to a lesser degree, the cerebellar cortex in AD cases without diabetes exhibit markedly reduced responses to insulin signaling in the IR→IRS-1→PI3K signaling pathway with greatly reduced responses to IGF-1 in the IGF-1R→IRS-2→PI3K signaling pathway. Reduced insulin responses were maximal at the level of IRS-1 and were consistently associated with basal elevations in IRS-1 phosphorylated at serine 616 (IRS-1 pS616) and IRS-1 pS636/639. In the HF, these candidate biomarkers of brain insulin resistance increased commonly and progressively from normal cases to mild cognitively impaired cases to AD cases regardless of diabetes or APOE ε4 status. Levels of IRS-1 pS616 and IRS-1 pS636/639 and their activated kinases correlated positively with those of oligomeric Aβ plaques and were negatively associated with episodic and working memory, even after adjusting for Aβ plaques, neurofibrillary tangles, and APOE ε4. Brain insulin resistance thus appears to be an early and common feature of AD, a phenomenon accompanied by IGF-1 resistance and closely associated with IRS-1 dysfunction potentially triggered by Aβ oligomers and yet promoting cognitive decline independent of classic AD pathology.

Direct demonstration of insulin and IGF-1 resistance in the cerebellar cortex (–) and HF (–) of AD cases without diabetes. 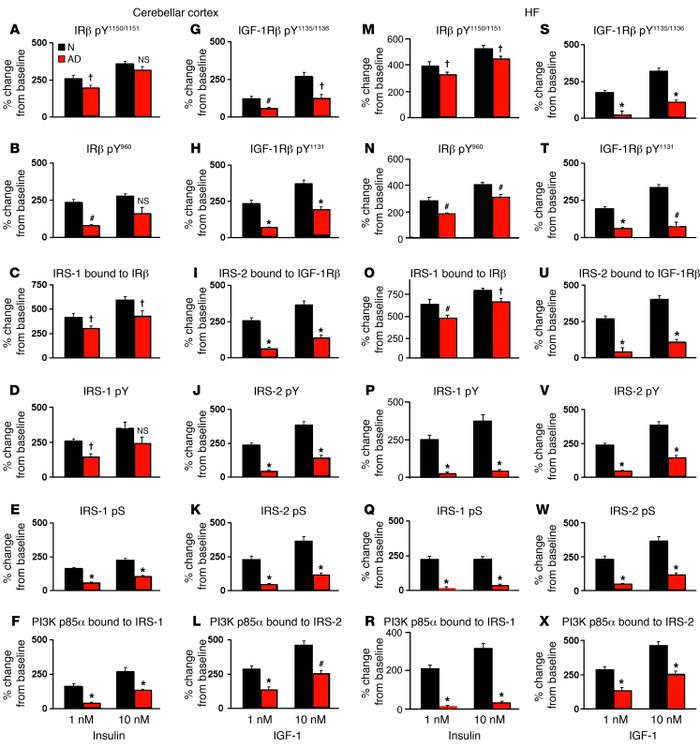 Both structures showed reduced responsiveness to near-physiological doses (1 nM) of insulin and IGF-1, as seen in receptor activation (, , , , , , , and ); IRS-1 bound to IRβ and IRS-2 bound to IGF-1Rβ (, , , and ); IRS-1 or IRS-2 activation (pY) or suppression (pS) (, , , , , , , and ); and PI3K p85α bound to IRS-1 or IRS-2 (, , , and ). Values (mean ± SEM) for N and AD cases denote percent increase in signaling responses above baseline (0 nM) in the same diagnostic group. Percentages were calculated from response strengths expressed as ratios of the phosphorylated or bound molecule to the total level of the same molecule or of the molecule to which it was bound (Supplemental Tables –). Unlike the HF, insulin resistance to 1 nM insulin in the cerebellar cortex was overcome at most levels of the signaling pathway by 10 nM insulin. Unlike insulin resistance, IGF-1 resistance was profound even at the receptor level. † < 0.05, # < 0.01, * < 0.001 vs. N. See Tables – for quantification.